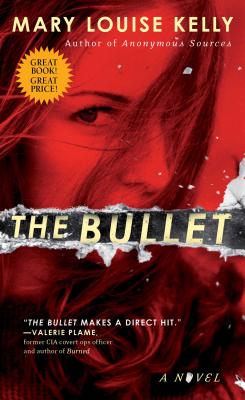 Nothing is what it seems in NPR correspondent Mary Louise Kelly’s “riveting, twisty tale” (Hallie Ephron, author of Night Night, Sleep Tight), in which a woman discovers a decades-old bullet at the base of her neck.

Caroline Cashion is stunned when an MRI reveals that she has a bullet lodged near the base of her skull. It makes no sense: she has never been shot. She has no scar. When she confronts her parents, she learns the truth: she was adopted when she was three years old, after her real parents were murdered in cold blood. Caroline had been there the night of the attack, and she’d been hit by a single gunshot to the neck. Buried too deep among vital nerves and blood vessels, the surgeons had left it, and stitched up the traumatized little girl with the bullet still inside.

Now, thirty-four years later, Caroline returns to her hometown to learn whatever she can about who her parents were, and why they died. A cop who worked the case reveals that even after all these years, police still don’t have enough evidence to nail their suspect.

The bullet in Caroline’s neck could identify the murderer... and that person will do anything to keep it out of the law’s hands. Now Caroline will have to decide: run for her life, or stay and fight?

With non-stop action, “an extremely likable narrator and twists and turns galore” (Alice LaPlante, author of Turn of Mind), The Bullet will keep you riveted until the very last page.

Praise For The Bullet: A Novel…