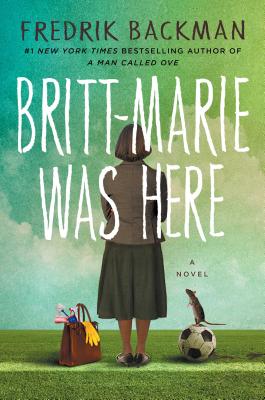 The New York Times bestselling author of A Man Called Ove, My Grandmother Asked Me to Tell You She’s Sorry, and Anxious People captivates readers with this “warm and satisfying” (People) story “about a woman rediscovering herself after a personal crisis…fans of Backman will find another winner in these pages” (Publishers Weekly).

Britt-Marie can’t stand mess. A disorganized cutlery drawer ranks high on her list of unforgivable sins. She begins her day at 6 a.m., because only lunatics wake up later than that. And she is not passive-aggressive. Not in the least. It's just that sometimes people interpret her helpful suggestions as criticisms, which is certainly not her intention. She is not one to judge others—no matter how ill-mannered, unkempt, or morally suspect they might be.

But hidden inside the socially awkward, fussy busybody is a woman who has more imagination,bigger dreams, and a warmer heart that anyone around her realizes.

When Britt-Marie walks out on her cheating husband and has to fend for herself in the miserable backwater town of Borg—of which the kindest thing one can say is that it has a road going through it—she is more than a little unprepared. Employed as the caretaker of a soon-to-be demolished recreation center, the fastidious Britt-Marie has to cope with muddy floors, unruly children, and a (literal) rat for a roommate. She finds herself being drawn into the daily doings of her fellow citizens, an odd assortment of miscreants, drunkards, layabouts—and a handsome local policeman whose romantic attentions to Britt-Marie are as unmistakable as they are unwanted. Most alarming of all, she’s given the impossible task of leading the supremely untalented children’s soccer team to victory. In this small town of big-hearted misfits, can Britt-Marie find a place where she truly belongs?

Funny and moving, observant and humane, Britt-Marie Was Here celebrates the unexpected friendships that change us forever, and the power of even the gentlest of spirits to make the world a better place.

Praise For Britt-Marie Was Here: A Novel…

“Backman has written another bestseller with his latest novel. While at first Britt-Marie seems intolerable and aggravating, readers are quickly endeared to her obsessive-compulsive ways and frank honesty. At first the writing style comes off sharp; however, readers quickly see that is how Britt-Marie processes the world and it too becomes something amicable. Heartfelt and truly stirring, Britt-Marie Was Here resonates long after the last page is read.”
— RT Magazine

“The bestselling author of A MAN CALLED OVE returns with this heartwarming story about a woman rediscovering herself after personal crisis. Backman reveals Britt-Marie’s need for order….with clear, tight descriptions. Insightful and touching, this is a sweet and inspiring story about truth and transformation. Fans of Backman’s will find another winner in these pages.”
— Publishers Weekly

"Britt-Marie’s metamorphosis from cocoon to butterfly seems all the more remarkable for the utterly discouraging environment in which it takes place."
— Booklist

BRITT-MARIE WAS HERE [is] the story of a curmudgeon you can’t help but grow to love… The story is by turns hilarious and heartbreaking, and you’ll find yourself cheering for Britt-Marie.”
— Salisbury Post

PRAISE FOR A MAN CALLED OVE

PRAISE FOR MY GRANDMOTHER ASKED ME TO TELL YOU SHE'S SORRY

1. How is Britt-Marie’s character revealed by her interactions with the people in Borg? In what ways do Borg’s citizens change Britt-Marie? Use specific examples to demonstrate your point.

2. Think about the children on Borg’s soccer team: to what extent are they responsible for Britt-Marie’s growth, and how? Does one particular child have greater influence on Britt-Marie than the others? If so, who, and why?

3. Describe the book’s narrative style. How would you characterize it? How does it play into your perception of Britt-Marie, or influence your understanding of events?

4. “She has difficulties remembering the last time she said anything at all, until one day she left him without a word. Because of this it always feels like the whole thing was her fault” (page 151). Communication plays an important role in any relationship, and Britt-Marie’s reflection on her own silence raises a curious point; to what extent do you think Britt-Marie contributed to the unraveling of her and Kent’s relationship with her silence? How much blame, if any, can fall on the shoulders of only one person in these cases?

5. Britt-Marie is a curious combination of strength and assertiveness mixed with anxiety and shyness. How are these seemingly opposing qualities related to each other in Britt-Marie, like two sides of the same coin?

6. How have Britt-Marie’s experiences as a girl and a young woman made her into the woman she is at the start of the novel? Did learning about her childhood change the way you felt about her as a character? Is there a larger message here about forming judgments of people we encounter without knowing their full story?

7. When we first meet her, Britt-Marie seems to be a fairly traditional, conservative person, yet in the course of the novel she is exposed to many issues and situations that previously didn’t enter her life as Kent’s wife. Consider her reaction to Ben’s date with another boy, or her visit to a prison, or her encounter with a masked gunman. How do these moments affect Britt-Marie? What can they tell us about who she is and about the community she’s joined in Borg?

8. Despite its often humorous tone, this book touches on complicated real-world situations and issues like the economic downturn, social class, the state of the modern family, and children’s rights. What impact has the economic downturn had on Borg? Did the novel cause you to think differently about the power of individuals to have a positive impact on their communities?

9. Consider the role of soccer in this story. What does soccer represent to the citizens of Borg, particularly to the children? In a world marked by instability and uncertainty, why is this sport so important to them?

10. Throughout the book, the team that an individual supports plays a role in the way that person is perceived by others and often tells a lot about him or her. Can you think of analogous scenarios in your own life where you have made certain assumptions about a person because of something he or she is passionate about?

11. Why do you think Britt-Marie decides to call the girl from the unemployment office to tell her that one of the children on the soccer team hit what he was aiming for? What does this moment signify for Britt-Marie?

12. “What is love if it’s not loving our lovers even when they don’t deserve it” (page 283). Do you agree with this statement, or does love without limits tend to lead to a relationship like Britt-Marie and Kent’s at the start of the novel?13. Why do you think that Kent decides to fight for Britt-Marie’s soccer pitch? Do you believe he’s really a changed man?14. Why do you think Britt-Marie ultimately makes the choice she does at the end of the story? What was the deciding moment, the impetus for her choice?

15. Do you think Britt-Marie will ever come back to Borg?