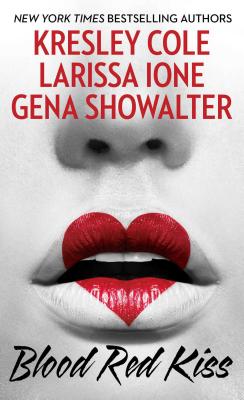 Get ready for a collection chock full of vamps, demons, aliens, and plenty of sizzle!

In Kresley Cole’s celebrated story “The Warlord Wants Forever,” the first in her scorching Immortals After Dark series, vampire warlord Nikolai Wroth will stop at nothing to claim his Bride, the one woman who can make his heart beat again. But can beautiful Myst the Coveted accept an enemy vampire as her own?

Tehya has spent the last twelve years as an accidental wolf, but is truly a vampire at heart. When she gets injured, Lobo sneaks her inside MoonBound’s headquarters and nurses her back to health…with potentially deadly consequences. Desire collides with danger in “Forsaken by Night,” a MoonBound Clan novella from Larissa Ione!

In Gena Showalter’s Otherworld Assassins novella, Dark Swan, Lilica Swan isn’t quite human or otherworlder; she is the best—and worst—of both. She is willing to do whatever proves necessary to save her sister from the seductive and deadly Alien Investigation and Removal agent, Dallas Gutierrez, even bond her life to his…effectively wedding him. But without consummation, the bond will fade. Can Dallas resist his insatiable desire for the powerful beauty? Or will she lead to his ultimate downfall?

Larissa Ione is the New York Times and USA TODAY bestselling author of the Demonica and  connected Lords of Deliverance series, as well as the MoonBound Clan Vampire series and other contemporary novels. An Air Force veteran, she traded in her career in meteorology to pursue her passion for writing. She lives in Wisconsin with her US Coast Guard husband, her teenage son, a rescue cat named Vegas, and her very own hellhound, Hexe. Visit her at LarissaIone.com.

Gena Showalter is the New York Times and USA TODAY bestselling author of more than fifty novels and multiple series, including the spellbinding Otherworld Assassins, Alien Huntress, and Lords of the Underworld series, her wildly popular young adult novels—Firstlife and Alice in Zombieland—and the highly addictive Original Heartbreakers series. Visit her at GenaShowalter.com.
Loading...
or support indie stores by buying on