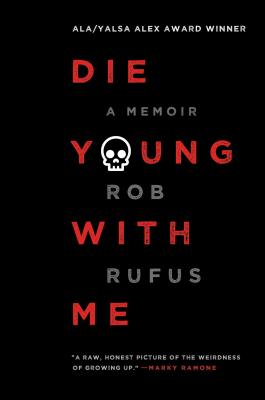 Die Young with Me

Winner of the American Library Association Alex Award, given to books written for adults that have special appeal to young adults.

In the tradition of John Green’s The Fault in Our Stars and Me and Earl and the Dying Girl comes the incredibly moving true story of a teenager diagnosed with cancer and how music was the one thing that helped him get through his darkest days.

Punk’s not dead in rural West Virginia. In fact, it blares constantly from the basement of Rob and Nat Rufus—identical twin brothers with spiked hair, black leather jackets, and the most kick-ass record collection in Appalachia. To them, school (and pretty much everything else) sucks. But what can you expect when you’re the only punks in town?

When the brothers start their own band, their lives begin to change: they meet friends, they attract girls, and they finally get invited to join a national tour and get out of their rat box little town.

But their plans are cut short when Rob is diagnosed with a rare form of cancer that has already progressed to Stage Four. Not only are his dreams of punk rock stardom completely shredded, there is a very real threat that this is one battle that can’t be won.

While Rob suffers through nightmarish treatments and debilitating surgery, Nat continues on their band’s road to success alone. But as Rob’s life diverges from his brother’s, he learns to find strength within himself and through his music. Die Young With Me is a raw, honest account of a brave teen’s fight with cancer and the many ways music helped him cope through his recovery.

Praise For Die Young with Me: A Memoir…

“Rob Rufus is a punk after my own heart and his book is a raw, honest picture of the weirdness of growing up.”
— Marky Ramone

“A resounding affirmation of how music can lift one's spirits beyond gray skies and bad news. . . . Rufus' memoir makes a valuable contribution to the literature of healing and recovery. It's a good piece of rock writing, too, with ‘one hell of a soundtrack.'”
— Kirkus Reviews

"This is the true story of the healing power of music."
— Inked Magazine

"After reading this book, and understanding what it took for him to take his seat behind the drumkit again, I’d be a fan even if I’d never heard a song."
— Midlife Mixtape

"Evocative . . . Rufus's writing describes the medical rabbit hole we all dread falling into in a style so candid you can imagine yourself tumbling in along with him."
— Vice

Rob Rufus is a musician and writer living in Nashville. His band, Blacklist Royals, has released two full-length albums and played in sixteen countries over the past five years. His new project, The Bad Signs, released their first single in 2015. He is the author of Die Young with Me.
Loading...
or
Not Currently Available for Direct Purchase