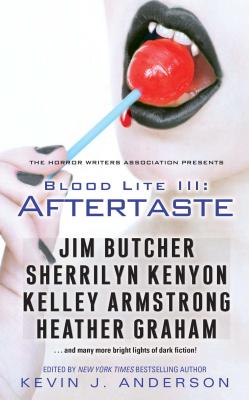 Sink your teeth into a smorgasbord of macabre morsels laced with horrific humor in this all-new Blood Lite collection! Whether you shriek with laughter or scream in fear . . . well, that’s simply a matter of taste.

Jim Butcher’s wizardly PI Harry Dresden pranks some high-tech monster seekers—and attempts to save a friend’s son whose life-energy is slowly being drained by an unknown adversary in “I Was a Teenage Bigfoot.” The Author from Hell has dropped dead, but a stressed-out editor is harassed by her emails from beyond the grave in Sherrilyn Kenyon’s “A Day in the Life.” The flesh is weak— and possibly even rotting—as a teenage virgin werewolf discovers on a visit to a brothel in Kelley Armstrong’s “V Plates.” Murder comes alive in “Mannequin,” by Heather Graham, as two thrill-seeking couples “axe” for trouble at a B&B with a bloody history.

Plus twenty-six other tales to tempt and terrorize you. . . .

Editor Kevin J. Anderson is the author of more than ninety novels, nearly half of which have appeared on national or international bestseller lists. He has more than 20 million books in print in thirty languages. He has won or been nominated for numerous prestigious awards, including the Nebula Award, Bram Stoker Award, and the SFX Reader’s Choice Award.
The Horror Writers Association (HWA) is a worldwide organization of writers and publishing professionals dedicated to promoting horror literature and the interests of those who write it. HWA was formed in the late 1980s with the help of many of great authors, including Dean Koontz, Robert McCammon, and Joe R. Lansdale. Today, with more than 900 members around the globe, it is the oldest and most respected professional organization devoted to the genre.
Loading...
or support indie stores by buying on