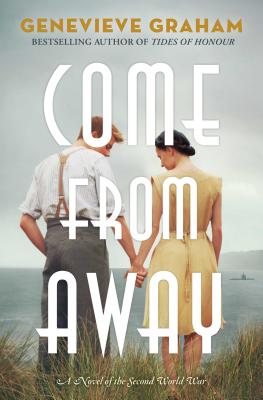 Come from Away (Paperback)

From the bestselling author of Tides of Honour and Promises to Keep comes a poignant novel about a young couple caught on opposite sides of the Second World War.

In the fall of 1939, Grace Baker’s three brothers, sharp and proud in their uniforms, board Canadian ships headed for a faraway war. Grace stays behind, tending to the homefront and the general store that helps keep her small Nova Scotian community running. The war, everyone says, will be over before it starts. But three years later, the fighting rages on and rumours swirl about “wolf packs” of German U-Boats lurking in the deep waters along the shores of East Jeddore, a stone’s throw from Grace’s window. As the harsh realities of war come closer to home, Grace buries herself in her work at the store.

Then, one day, a handsome stranger ventures into the store. He claims to be a trapper come from away, and as Grace gets to know him, she becomes enamoured by his gentle smile and thoughtful ways. But after several weeks, she discovers that Rudi, her mysterious visitor, is not the lonely outsider he appears to be. He is someone else entirely—someone not to be trusted. When a shocking truth about her family forces Grace to question everything she has so strongly believed, she realizes that she and Rudi have more in common than she had thought. And if Grace is to have a chance at love, she must not only choose a side, but take a stand.

Come from Away is a mesmerizing story of love, shifting allegiances, and second chances, set against the tumultuous years of the Second World War.

Genevieve Graham is the #1 bestselling author of The Forgotten Home Child, Tides of Honour, Promises to Keep, Come from Away, and At the Mountain’s Edge. She is passionate about breathing life back into Canadian history through tales of love and adventure. She lives near Halifax, Nova Scotia. Visit her at GenevieveGraham.com or on Twitter and Instagram @GenGrahamAuthor.

Praise For Come from Away…

Praise for Come From Away

“Taking inspiration from an old Maritime legend, Come from Away is gripping from its first page to last. Impossible to put down.”
— Toronto Star

“The talented Genevieve Graham once again calls upon a fascinating true story in Canadian history to remind us that beneath the differences of our birth, and despite the obstacles we face, we’re all human underneath. Vividly drawn and heartwarming, Come from Away is a beautiful look at the choices we make in the face of both love and war.”
— Kristin Harmel, internationally bestselling author of The Sweetness of Forgetting

“In Come from Away, Graham once again weaves a captivating story and romance built around actual events. With smooth prose and deft attention to detail, she creates a slow-burning but engaging romance and brings the reader right back with her to the beautiful coast of Nova Scotia—and to the horrors and hardships of war.”
— Sally Christie, author of The Mistresses of Versailles trilogy

“Graham continues her worthy crusade of recounting pivotal Canadian history; . . . this poignant story [depicts] the travesties of war both on the battlefield and the home front.”
— RT Book Reviews
or support indie stores by buying on
Copyright © 2020 American Booksellers Association