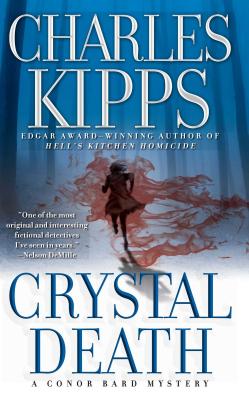 Conor Bard—the fortysomething-year-old homicide detective who doesn’t always play by the rules—is working on the streets of New York City’s Diamond District when he becomes involved in a deadly game of international intrigue.


Crystal Death begins as Detective Conor Bard is called off the stage of the Rhythm Bar, where his rock band is performing, to investigate the murder of a beautiful young Israeli diamond dealer in midtown Manhattan. Bard quickly learns that a priceless red diamond (yes, there are red diamonds) is missing and that the South African government is determined to find it.

The list of murder suspects grows quickly as Conor Bard and his new partner, Rosita Rubio, struggle to unravel the conflicting information they uncover.

Could the cold, calculating inspector from Johannesburg actually be the killer? Is he inserting himself into the investigation to cover his tracks? Or perhaps the lovesick jeweler, whose persistent advances were met with indifference by the victim, faced one rejection too many? Other suspects include an Indian diamond cutter who may or may not be linked to the red diamond; a billionaire collector from Abu Dhabi who will go to any lengths to own rare gems; a ruthless international smuggler; and a stunning Indian businesswoman whom Conor Bard falls for, of course.

Crystal Death gives readers a look inside the international diamond trade and paints an unsentimental, accurate picture of the life of a New York City detective. Fans of Hell’s Kitchen Homicide will welcome this second installment in the Conor Bard mystery series. The characters are genuine, the streets are real, and Kipps’s TV pedigree is evident once again in the fast pace and gritty reality of the story.

Screenwriter/Producer/Author Charles Kipps has won an Emmy, a Peabody, and an Edgar Award. His early career as a journalist, included a stint as Features Editor for Variety.  He is the author of two non-fiction books, Out of Focus and Cop Without A Badge (recently reissued) and the novels Hell's Kitchen Homicide and Crystal Death (coming September 2010).
Loading...
or support indie stores by buying on