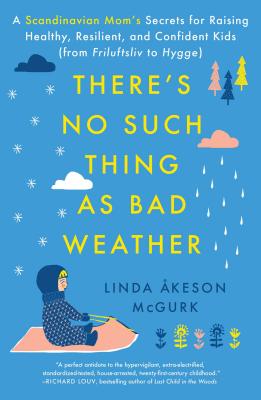 There's No Such Thing as Bad Weather

A Scandinavian Mom's Secrets for Raising Healthy, Resilient, and Confident Kids (from Friluftsliv to Hygge)

Bringing Up Bébé meets Last Child in the Woods in this lively, insightful memoir about a mother who sets out to discover if the nature-centric parenting philosophy of her native Scandinavia holds the key to healthier, happier lives for her American children.

When Swedish-born Linda McGurk moved to small-town Indiana with her American husband to start a family, she quickly realized that her outdoorsy ways were not the norm. In Sweden children play outside all year round, regardless of the weather, and letting young babies nap outside in freezing temperatures is not only common—it is a practice recommended by physicians. In the US, on the other hand, she found that the playgrounds, which she had expected to find teeming with children, were mostly deserted. In preschool, children were getting drilled to learn academic skills, while their Scandinavian counterparts were climbing trees, catching frogs, and learning how to compost. Worse, she realized that giving her daughters the same freedom to play outside that she had enjoyed as a child in Sweden could quickly lead to a visit by Child Protective Services.

The brewing culture clash finally came to a head when McGurk was fined for letting her children play in a local creek, setting off an online firestorm when she expressed her anger and confusion on her blog. The rules and parenting philosophies of her native country and her adopted homeland were worlds apart.

Struggling to fit in and to decide what was best for her children, McGurk turned to her own childhood for answers. Could the Scandinavian philosophy of “there is no such thing as bad weather, only bad clothes” be the key to better lives for her American children? And how would her children’s relationships with nature change by introducing them to Scandinavian concepts like friluftsliv (“open-air living”) and hygge (the coziness and the simple pleasures of home)? McGurk embarked on a six-month-long journey to Sweden to find out. There’s No Such Thing as Bad Weather is a fascinating personal narrative that highlights the importance of spending time outdoors, and illustrates how the Scandinavian culture could hold the key to raising healthier, resilient, and confident children in America.

Praise For There's No Such Thing as Bad Weather: A Scandinavian Mom's Secrets for Raising Healthy, Resilient, and Confident Kids (from Friluftsliv to Hygge)…

“Born and raised in Sweden with an ingrained appreciation for the outdoors, McGurk feels out of step with American culture when she tries to reproduce that childhood for her children in Indiana. Amusing interactions, such as one with a concerned motorist who passes her pushing her daughter in a stroller and walking her dog in midwinter, pepper the story….McGurk’s work will be encouraging to like-minded parents who feel American culture excessively emphasizes risk avoidance.”
—Publishers Weekly

"The author expertly combines personal memories of her childhood and that of her children with scientific data and research to show the significant disparities in the way children interact with nature in [the U.S. and Sweden]... A fascinating exploration of the importance of the outdoors to childhood development."
—Kirkus Reviews

"Linda McGurk offers a perfect antidote to the hyper-vigilant, extra-electrified, standardized-tested, house-arrested, 21st-century childhood and the experts who push it. Practical and wise, There’s No Such Thing as Bad Weather proves just that, and much more.”
—Richard Louv, bestselling author of LAST CHILD IN THE WOODS and VITAMIN N

“There’s nothing I love more than an author who gives parents a reason to feel optimistic, instead of telling us how we’re ruining our kids forever by (fill in the blank with something you used to do without thinking twice). Linda Akeson McGurk is that optimism-granter. Plus, she’s funny. What a great package!”
—Lenore Skenazy, author of FREE RANGE KIDS

"What an enjoyable romp through all the pleasures, benefits, and joy that free play and nature offer! Swedish-born McGurk guides the reader through all the delights that a varied outdoor life can afford. The book is packed with personal anecdotes and scientific studies, which provide the reader with nuanced insights into the potentials of open-air life in the most beautiful way. Everyone all over the world can gain something from the valuable wisdom found in this book. As a strong supporter of free play and its importance for children's well-being, I highly recommend this book."
—Iben Dissing Sandahl, author of PLAY THE DANISH WAY and THE DANISH WAY OF PARENTING

"Children need fresh air, ample time to play, and freedom to take risks—something other cultures sometimes seem to understand far better than we do. In There's No Such Thing as Bad Weather, Linda Akeson McGurk takes us inside the fascinating world of Scandinavian parenting with its refreshing and essential perspective on childhood. This is a heartfelt manifesto on the importance of the sort of unhurried, nature-rich childhood that every American child deserves."
—Christine Gross-Loh, author of THE PATH

"Smart, friendly and Swedish. Packed with sane ideas that will get your children outside, independent, and filled with the joy of living. This book will open your eyes—or maybe tempt you to move to Sweden. Now: Go outside and play!"
—Heather Shumaker, author of IT'S OK NOT TO SHARE and IT'S OK TO GO UP THE SLIDE

"I could not put this book down! Linda McGurk not only offers a fresh perspective about parenting and outdoor play from a Scandinavian viewpoint, but she is a fabulous storyteller and will hook you on the first page.”
—Angela Hanscom, author of BALANCED AND BAREFOOT

"If There’s No Such Thing as Bad Weather doesn’t make you want to move to Scandinavia, it will at least make you pledge to bring more Scandinavian habits into your life. With abundant warmth, humor, and important research, Linda Akeson McGurk makes the case for getting your family out into nature, no matter the season, and shares invaluable tips for enjoying the benefits of outdoor play, even in the land of mall-walking, videogames, and relentless academic pressure."
—Susan Sachs Lipman, author of FED UP WITH FRENZY

"Linda McGurk's compelling book There’s No Such Thing as Bad Weather compares the Swedish and U.S. historical and current cultural differences in beliefs and practices regarding young children's exposure to nature. Linda's upbringing in Sweden meant that she had an enormous amount of outdoor time as a child, much like those of us who grew up in the U.S. prior to 1980. Unfortunately, within the last 30-40 years, childhood in the U.S. no longer automatically includes extended outdoor free play. Like Linda, many in the early childhood education field are worried about the well-documented negative consequences from this lack of outdoor time. Besides the obvious physical benefits of spending time in nature, there are proven mental health benefits as well. Additionally, when children bond with nature at an early age, they develop empathetic stewardship qualities which compel them to seek to protect the environment. It is heartening to know that there are still countries like Sweden which actively advocate and culturally support children's right to extended outdoor time. Hopefully we can begin to incorporate some of Sweden's friluftsliv—a love of open air life—into our cultural identity here in the U.S."
—Erin Kenny, Co-founder and director of Cedarsong Nature School, author of FOREST KINDERGARTENS

Linda McGurk is a Swedish-American freelance journalist and blogger who lives with her family in rural Indiana. A nature lover and mother of two, she believes that the best childhood memories are created outside, while jumping in puddles, digging in dirt, catching bugs, and climbing trees. McGurk’s writings about natural parenting and outdoor play have appeared in a wide range of newspapers, magazines, and online publications in North America as well as Europe, including BonBon Break, Outdoor Families Magazine, and Childhood 101. In 2013, she started the blog Rain or Shine Mamma to inspire outdoor play and adventure every day, regardless of the weather. She is the author of There’s No Such Thing as Bad Weather.
Loading...
or
Not Currently Available for Direct Purchase