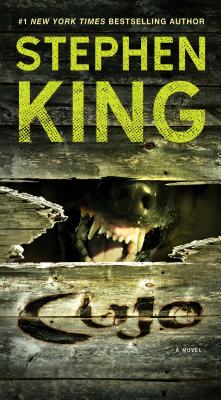 The #1 national bestseller for Stephen King’s rabid fans, Cujo “hits the jugular” (The New York Times) with the story of a friendly Saint Bernard that is bitten by a sick bat. Get ready to meet the most hideous menace ever to savage the flesh and devour the mind.

"Once upon a time, not so long ago, a monster came to the small town of Castle Rock, Maine."

Cujo used to be a big friendly dog, lovable and loyal to his trinity (THE MAN, THE WOMAN, and THE BOY) and everyone around him, and always did his best to not be a BAD DOG. But that all ends on the day this nearly two-hundred-pound Saint Bernard makes the mistake of chasing a rabbit into a hidden underground cave, setting off a tragic chain of events. Now Cujo is no longer himself as he is slowly overcome by a growing sickness, one that consumes his mind even as his once affable thoughts turn uncontrollably and inexorably to hatred and murder. Cujo is about to become the center of a horrifying vortex that will inescapably draw in everyone around him—a relentless reign of terror, fury, and madness from which no one in Castle Rock will truly be safe...

"Hits the jugular...King's most disturbing horror yet!"
— The New York Times

"A word of advice: read [Cujo] in your well-lighted home, behind locked doors, when you're snug in your own bed."
— Denver Post

"A biting novel of gut-twisting terror and suspense."
— Publishers Weekly

"White knuckles all the way, Cujo is most devastatingly effective in its use of mundane domestic detail to form the very sinews of terror."
— Cosmopolitan

"It is nothing less than the state of the art in horror fiction."
— Atlanta Journal

"Just when your blood pressure is back to normal, Stephen King is at it again...with a nightmare his fans won't forget."
— Kansas City Star