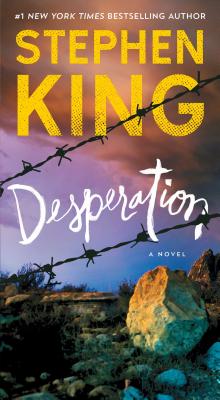 Stephen King’s #1 national bestseller about a little mining town, Desperation, that many will enter on their way to somewhere else. But getting out is not easy as it would seem…

"I see holes like eyes. My mind is full of them."

For all intents and purposes, police officer Collie Entragian, chief law enforcement for the small mining town of Desperation, Nevada, appears to be completely insane. He's taken to stopping vehicles along the desolate Interstate 50 and abducting unwary travelers with various unusual ploys. There's something very wrong here in Desperation...and Officer Entragian is only at the surface of it. The secrets embedded in Desperation's landscape, and the horrifying evil that infects the town like some viral hot zone, are both awesome and terrifying. But one of Entragian's victims, young David Carver, seems to know—and it scares him nearly to death to realize this truth—that the forces being summoned to combat this frightful, maniacal aberration are of equal and opposite intensity...

"A big, serious, scary novel...King is at the top of his game."
— Entertainment Weekly

"Surreal, tragic scary...builds to an epic climax. Terror that resonates long after the book is finished."
— Washington Post Book World

"Our best novelist of horror and our most serious anatomist of "horror" since Edgar Allan Poe. A tour de force...King is having great fun...vastly entertaining. He is a quintessentially American writer."
— Atlanta Journal Constitution

"A gory, gut-wrenching exercise in fear and paranoia. Desperation is a fast-paced, in-your-face, heart-pounding horror-thon that builds to an exciting conclusion."
— Detroit Free Press

"A claustrophobic nightmare of horror and madness."
— Dallas Morning News

"No one is as deft with the carnage, or has as much fun with it....King is the Winslow Homer of blood."
— The New Yorker