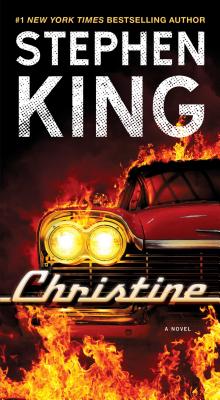 “This is the story of a lover’s triangle…It was bad from the start. And it got worse in a hurry.”

It’s love at first sight for high school student Arnie Cunningham when he and his best friend Dennis Guilder spot the dilapidated 1958 red-and-white Plymouth Fury for sale—dubbed “Christine” by its original cantankerous owner—rusting away on a front lawn of their suburban Pennsylvania neighborhood. Dennis knows that Arnie’s never had much luck in the looks or popularity department, or really taken an interest in owning a car . . . but Christine quickly changes all that. Arnie suddenly has the newfound confidence to stick up for himself, going as far as dating the most beautiful girl at Libertyville High—transfer student Leigh Cabot—even as a mysteriously restored Christine systematically and terrifyingly consumes every aspect of Arnie’s life. Dennis and Leigh soon realize that they must uncover the awful truth behind a car with a horrifying and murderous history. Hell hath no fury like a woman scorned, and heaven help anyone who gets in Christine’s way…