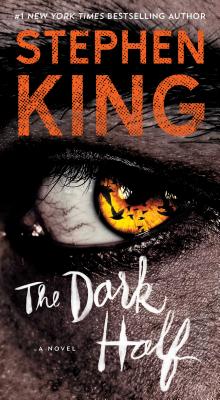 “I’m back...I’m back from the dead and you don’t seem glad to see me at all, you ungrateful son of a bitch.”

After thirteen years of international bestseller stardom with his works of violent crime fiction, author George Stark is officially declared dead—revealed by a national magazine to have been killed at the hands of the man who created him: the once well-regarded but now obscure writer Thad Beaumont. Thad’s even gone so far as to stage a mock burial of his wildly successful pseudonym, complete with tombstone and the epitaph “Not a Very Nice Guy.” Although on the surface, it seems that Thad can finally concentrate on his own novels, there’s a certain unease at the prospect of leaving George Stark behind. But that’s nothing compared to the horror about to descend upon Thad’s new life. There are the vicious, out-of-control nightmares, for starters. And how is he able to explain the fact that everyone connected to George Stark’s untimely demise is now meeting a brutal end of their own in a pattern of homicidal savagery...and why each blood-soaked crime scene has Thad’s fingerprints all over it? Thad Beaumont may have once believed that George Stark was running out of things to say, but he’s going to find out just how wrong he is...