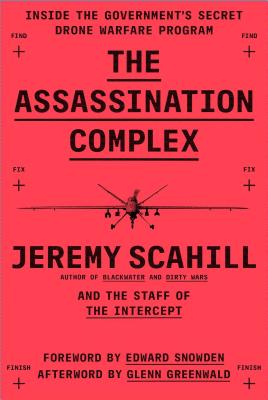 Jeremy Scahill, The Staff of The Intercept

Major revelations about the US government’s drone program—bestselling author Jeremy Scahill and his colleagues at the investigative website The Intercept expose stunning new details about America’s secret assassination policy.

When the US government discusses drone strikes publicly, it offers assurances that such operations are a more precise alternative to troops on the ground and are authorized only when an “imminent” threat is present and there is “near certainty” that the intended target will be killed. The implicit message on drone strikes from the Obama administration has been trust, but don’t verify.

The online magazine The Intercept exploded this secrecy when it obtained a cache of secret slides that provide a window into the inner workings of the US military’s kill/capture operations in Afghanistan, Yemen, and Somalia. Whether through the use of drones, night raids, or new platforms yet to be employed, these documents show assassination to be central to US counterterrorism policy.

The classified documents reveal that Washington’s fourteen-year targeted killing campaign suffers from an overreliance on flawed signals intelligence, an apparently incalculable civilian toll, and an inability to extract potentially valuable intelligence from terror suspects. This campaign, carried out by two presidents through four presidential terms, has been deliberately obscured from the public and insulated from democratic debate. The Assassination Complex allows us to understand at last the circumstances under which the US government grants itself the right to sentence individuals to death without the established checks and balances of arrest, trial, and appeal.

The book will include original contributions from Glenn Greenwald and Edward Snowden.

Praise For The Assassination Complex: Inside the Government's Secret Drone Warfare Program…

"Readers will be left in no doubt that drone warfare affronts morality and the Constitution. . . . Convincing and damning."

"A searing, facts-driven indictment of America’s drone wars and their implications for U.S. democracy and foreign policy. A must-read for concerned citizens."

Jeremy Scahill is one of the three founding editors of The Intercept. He is an investigative reporter, war correspondent, and author of the international bestselling books Dirty Wars: The World Is a Battlefield and Blackwater: The Rise of the World’s Most Powerful Mercenary Army. Scahill has served as the national security correspondent for The Nation and Democracy Now! and was twice awarded the prestigious George Polk Award. Scahill is a producer and writer of the award-winning film Dirty Wars, which premiered at the 2013 Sundance Film Festival and was nominated for an Academy Award.
Loading...
or
Not Currently Available for Direct Purchase