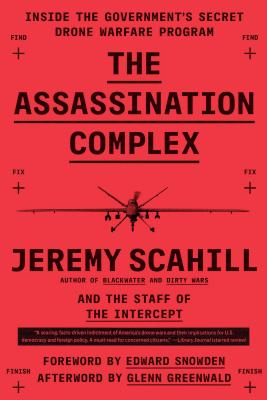 Jeremy Scahill, The Staff of The Intercept

“A searing, facts-driven indictment of America’s drone wars and their implications for US democracy and foreign policy. A must-read for concerned citizens” (Library Journal, starred review) from bestselling author Jeremy Scahill and his colleagues at the investigative website The Intercept.

Drones are a tool, not a policy. The policy is assassination. But drone strikes often kill people other than the intended target. These deaths, which have included women and children, dwarf the number of actual combatants who have been assassinated by drones. They have generated anger toward the United States among foreign populations and have even become a recruiting tool for jihadists.

The first drone strike outside a declared war zone was conducted more than twelve years ago, but it was not until May 2013 that the White House released a set of standards and procedures for conducting such strikes. However, there was no explanation of the internal process used to determine whether a suspect should be killed without being indicted or tried, even if that suspect is an American citizen. The implicit message of the Obama administration has been: Trust, but don’t verify.

The Assassination Complex reveals stunning details of the government’s secretive drone warfare program based on documents supplied by a confidential source in the intelligence community. These documents make it possible to begin the long-overdue debate about the policy of drone warfare and how it is conducted. The Assassination Complex allows us to understand at last the circumstances under which the US government grants itself the right to sentence individuals to death without the established checks and balances of arrest, trial, and appeal—“readers will be left in no doubt that drone warfare affronts morality and the Constitution” (Kirkus Reviews).

Praise For The Assassination Complex: Inside the Government's Secret Drone Warfare Program…

"Readers will be left in no doubt that drone warfare affronts morality and the Constitution. . . . Convincing and damning."
— Kirkus Reviews

"A searing, facts-driven indictment of America’s drone wars and their implications for U.S. democracy and foreign policy. A must-read for concerned citizens."
— Library Journal (starred review)

Jeremy Scahill is one of the three founding editors of The Intercept. He is an investigative reporter, war correspondent, and author of the international bestselling books Dirty Wars: The World Is a Battlefield and Blackwater: The Rise of the World’s Most Powerful Mercenary Army. Scahill has served as the national security correspondent for The Nation and Democracy Now! and was twice awarded the prestigious George Polk Award. Scahill is a producer and writer of the award-winning film Dirty Wars, which premiered at the 2013 Sundance Film Festival and was nominated for an Academy Award.
Loading...
or support indie stores by buying on