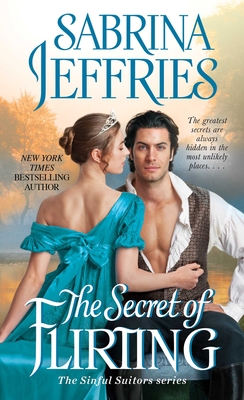 The Secret of Flirting (The Sinful Suitors #5)

The moment spymaster Baron Fulkham meets the stunning Princess Aurore of Chanay, he’s positive her royal persona is a ruse and that she’s actually Monique Servais, the mysterious actress he met three years before in Dieppe. But as he pursues his suspicions, he uncovers a plot of attempted assassination and betrayal that could very well destroy his career, expose his own secrets...and ruin the woman he’s rapidly coming to love.

The Secret of Flirting is a sizzling historical romance filled with fast-paced storytelling, an enchanting heroine, and a sexy hero, perfect for fans of Regency romance.

Praise For The Secret of Flirting (The Sinful Suitors #5)…

"The story flies along, pushed by not only snappy dialogue and mystery, but by the growing love between the characters. Master storyteller Jeffries is at the top of her game."
— --RT Book Reviews (4 1/2 stars, top pick)

"The mystery behind Monique's deception, coupled with the sinister suspense around a determined killer, add allure to this expertly plotted novel and its magnetic characters."
— --Publishers Weekly