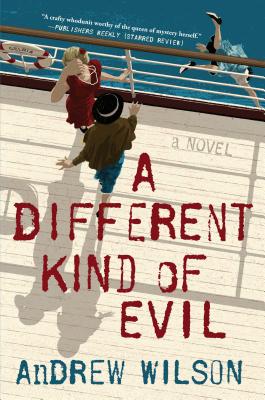 A Different Kind of Evil (Hardcover)

Agatha Christie—the Queen of Crime—travels to the breathtaking Canary Islands to investigate the mysterious death of a British agent in this riveting sequel to the “twisty thriller” (Publishers Weekly) A Talent for Murder.

Two months after the events of A Talent for Murder, during which Agatha Christie “disappeared,” the famed mystery writer’s remarkable talent for detection has captured the attention of British Special Agent Davison.

Now, at his behest, she is traveling to the beautiful Canary Islands to investigate the strange and gruesome death of Douglas Greene, an agent of the British Secret Intelligence Service. As she embarks on a glamorous cruise ship to her destination, she suddenly hears a scream. Rushing over to the stern of the liner, she witnesses a woman fling herself over the side of the ship to her death.

After this shocking experience, she makes it to the Grand Hotel in a lush valley on the islands. There, she meets a diverse and fascinating cast of characters, including two men who are suspected to be involved in the murder of Douglas Greene: an occultist similar to Aleister Crowley; and the secretary to a prominent scholar, who may also be a Communist spy. But Agatha soon realizes that nothing is what it seems here and she is surprised to learn that the apparent suicide of the young woman on the ocean liner is related to the murder of Douglas Greene. Now she has to unmask a different kind of evil in this sinister and thrilling mystery.

Andrew Wilson is an award-winning journalist and author. His work has appeared in a wide variety of publications including the Guardian, the Washington Post, the Sunday Times, and the Smithsonian Magazine. He is the author of four acclaimed biographies, a book about the survivors of the Titanic, and the novels, The Lying Tongue, A Talent for Murder, A Different Kind of Evil, Death in a Desert Land.

Praise For A Different Kind of Evil: A Novel…

"Stellar...a crafty whodunit worthy of the queen of mystery herself."

PRAISE FOR A TALENT FOR MURDER

“[A] twisty thriller…Wilson fully realizes the potential of this ominous setup.”

"The queen of crime is the central character in this audacious mystery, which reinvents the story of her mysterious disappearance with thrilling results."

"Equal parts psychological thriller, detective fiction, and mystery. Readers will become emotionally involved with the protagonist, whom Wilson portrays as both sympathetic and quick witted."

"A fast-paced, pleasingly twisted and creepy thriller...reads like an amalgamation of a clever Agatha Christie puzzler with the darker characters and psychological insights found in Patricia Highsmith's thrillers...With Strong characters, shrewd plotting and a skillful blending of fact and fiction, A Talent for Murder is a compelling period mystery that will keep whodunit fans captivated."
or
Not Currently Available for Direct Purchase
Copyright © 2020 American Booksellers Association