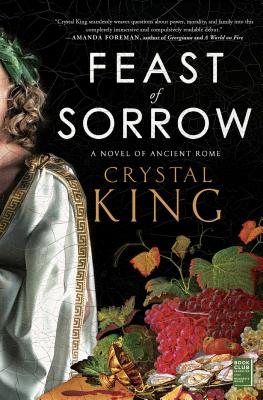 A Novel of Ancient Rome

Set amongst the scandal, wealth, and upstairs-downstairs politics of a Roman family, this “addictively readable first novel” (Kirkus Reviews) features the man who inspired the world’s oldest cookbook and the ambition that led to his destruction.

In the twenty-sixth year of Augustus Caesar’s reign, Marcus Gavius Apicius has a singular ambition: to serve as culinary adviser to Caesar. To cement his legacy as Rome’s leading epicure, the wealthy Apicius acquires a young chef, Thrasius, for the exorbitant price of twenty thousand denarii.

Apicius believes that the talented Thrasius is the key to his culinary success, and with the slave’s help he soon becomes known for his lavish parties and sumptuous meals. For his part, Thrasius finds a family among Apicius’s household, which includes his daughter, Apicata; his wife, Aelia; and her handmaiden Passia, with whom Thrasius falls passionately in love. But as Apicius draws closer to his ultimate goal, his dangerous single-mindedness threatens his young family and places his entire household at the mercy of the most powerful forces in Rome. “A gastronomical delight” (Associated Press), Feast of Sorrow is a vibrant novel, replete with love and betrayal, politics and intrigue, and sumptuous feasts that bring ancient Rome to life.

Praise For Feast of Sorrow: A Novel of Ancient Rome…

"Finely paced. . . . the novel combines exotic menus with the melodrama of a Greek tragedy. King’s debut is a compelling historical drama with an appetizing center."

Crystal King is an author, culinary enthusiast, and marketing expert. Her writing is fueled by a love of history and a passion for the food, language, and culture of Italy. She has taught classes in writing, creativity, and social media at several universities including Harvard Extension School and Boston University, as well as at GrubStreet, one of the leading creative writing centers in the US. A Pushcart Prize–nominated poet and former co-editor of the online literary arts journal Plum Ruby Review, Crystal received her MA in critical and creative thinking from UMass Boston, where she developed a series of exercises and writing prompts to help fiction writers in medias res. She resides in Boston but considers Italy her next great love after her husband, Joe, and their two cats, Nero and Merlin. She is the author of Feast of Sorrow.
Loading...
or support indie stores by buying on