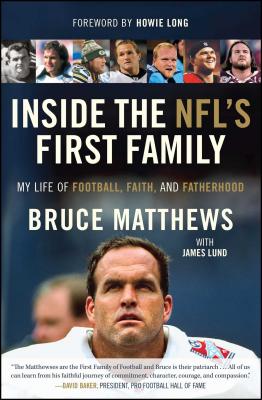 Inside the NFL's First Family

My Life of Football, Faith, and Fatherhood

From the man who has played in more NFL games than any lineman in the football league’s history comes a memoir about the Matthews family and how eight people over three generations have achieved success in the NFL—more than any other family in sports history.

No family has qualified more of its members for the demands and rewards of the National Football League than the Matthews clan—eight and counting over three generations. They include Bruce’s father, Clay Senior, an original NFL San Francisco 49er; his brother Clay Junior, a four-time All-Pro for the Cleveland Browns; and nephew Clay III, a Defensive Player of the Year and Super Bowl champion with the Green Bay Packers. Bruce Matthews may be the best of them all, a fourteen-time Pro Bowler with the Houston Oilers and Tennessee Titans, holder of the all-time consecutive starts record for offensive linemen, and inductee in the NFL Hall of Fame.

The enduring success of the Matthews family is no accident. Their competitive nature, passion for excellence, never-quit attitude, compassion for the disadvantaged, and love for each other has propelled them to the peak of their abilities and professions. For Bruce, the foundation of it all is his faith in God. Inside the NFL’s First Family shows how the highs and lows of Bruce’s NFL career and expanding responsibilities as a husband and father led him to a lasting commitment to Christ. This book is a fascinating peek behind the curtain of professional football, featuring the insider stories that every fan craves. It also shows how Bruce and his family successfully dealt with challenges such as depression, cancer, and Down Syndrome. Yet Inside the NFL’s First Family offers readers even more—the principles and beliefs that have enabled the Matthewses to excel in football and in life.

Praise For Inside the NFL's First Family: My Life of Football, Faith, and Fatherhood…

“Bruce Matthews is a winner as an NFL player, a husband, a father, and a man of God. His new book, which tells the amazing story of the Matthews family, is a winner too.”
— Tim Brown, NFL Hall of Fame wide receiver and author of The Making of a Man

Bruce Matthews is a fourteen-time Pro Bowler, holder of the all-time consecutive starts record for offensive linemen, and inductee in the NFL Hall of Fame. He was named to the NFL Pro Football Hall of Fame All-Time Team. Following his retirement, Matthews began hosting golf tournaments for the Greater Houston Fellowship of Christian Athletes and the Texas Special Olympics. He lives in Sugar Land, Texas, with his wife, Carrie, and their seven children. He is the author of Inside the NFL’s First Family.

James Lund is an award-winning collaborator, editor, and author who enjoys helping people develop their voice and message. He is a publishing veteran who has worked with bestselling authors, public figures, and leaders including Max Lucado, George Foreman, Tim Brown, Kathy Ireland, Jim Caviezel, and others. Three of his projects have earned the ECPA Gold Medallion Award. He lives with his wife, Angela, and children in Central Oregon, where he enjoys hiking, rafting, softball, and performing music with friends.
or
Not Currently Available for Direct Purchase