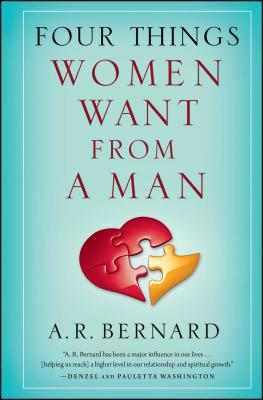 After decades of preaching, teaching, and counseling, influential Christian leader A.R. Bernard reveals the four qualities women want in a man—qualities that contribute to a satisfying and happy relationship.

As a longtime pastor of a big-city church, A.R. Bernard has witnessed couples in every stage of life. He’s been with them as they experienced dizzying joys, unspeakable tragedies, and everything in between.

As men and women have come to Bernard for spiritual counseling and advice, he’s learned patterns of behavior that are repeated time and again. After almost four decades of preaching, teaching, and counseling, he’s seen that while every situation is unique, people’s behaviors and consequences are amazingly consistent. With this in mind, Bernard has developed a simple system for understanding how couples relate to each other.

Maturity, decisiveness, consistency, and strength—these are the four things women want and need most from a man. In his book, Bernard teaches readers how to identify and cultivate these traits toward a happy and long-lasting relationship—one built to weather any storm.

Praise For Four Things Women Want from a Man…

“The truths of this book… have the power to heal, transform, and revolutionize any relationship.”

"A.R. Bernard has been a major influence in our lives...[helping us reach] a higher level in our relationship and spiritual growth."
— Denzel and Pauletta Washington

A.R. Bernard is the spiritual leader of the New York Christian Cultural Center in Brooklyn, which, in addition to serving its members, conducts aggressive outreach programs in the community, including several schools for inner-city children, literary groups, and special ministries for the elderly and incarcerated. Bernard serves on the board of directors of the Brooklyn Public Library and the New York City Economic Development Corporation. His sermons are broadcast nationally on television and radio. He also lectures frequently at universities, churches, and Fortune 500 companies. He lives in New York with his wife, Karen, and their children.
Loading...
or support indie stores by buying on