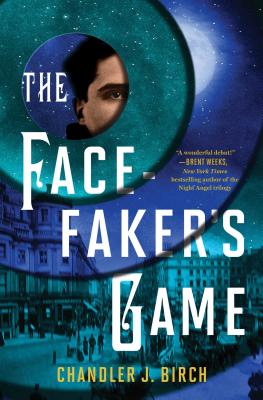 For fans of Brandon Sanderson and Scott Lynch, a fantasy about a clever young beggar who bargains his way into an apprenticeship with a company of thieving magicians and uses his newfound skills in a vendetta against a ruthless crime lord.

Ashes lives in Burroughside—the dirtiest, most crime-ridden district in the huge city of Teranis. His neighbors are gangs of fellow orphans, homeless madmen, and monsters that swarm the streets at nightfall. Determined to escape Burroughside, Ashes spends his days begging, picking pockets, and cheating at cards. When he draws the wrath of Mr. Ragged, Burroughside’s brutal governor, he is forced to flee for his life, only to be rescued by an enigmatic man named Candlestick Jack.

Jack leads a group of Artificers, professional magicians who can manipulate light with their bare hands to create stunningly convincing illusions. Changing a face is as simple as changing a hat. Ashes seizes an opportunity to study magic under Jack and quickly befriends the rest of the company: Juliana, Jack’s aristocratic wife; William, his exacting business partner; and Synder, his genius apprentice. But all is not as it seems: Jack and his company lead a double life as thieves, and they want Ashes to join their next heist. Between lessons on light and illusion, Ashes begins preparing to help with Jack’s most audacious caper yet: robbing the richest and most ruthless nobleman in the city.

Praise For The Facefaker's Game…

“It takes a special writer to blend Dickens, Sanderson, and Lynch — and yet make it totally his own. Chandler Birch succeeds beautifully. A wonderful debut!”
—Brent Weeks, New York Times bestselling author of the Night Angel trilogy

“As fun as Mistborn. The writing is effortless, the pacing quick, and the characters delightful. I'm annoyed that Birch took to heart the adage, ‘Always leave them wanting more.’ Because I want.”
—Stephen S. Power, author of The Dragon Round

Chandler J. Birch grew up ignoring the Rocky Mountains in favor of Middle Earth, Narnia, and Temerant. He lives in Colorado Springs with his wife, Kelsey, and their two dogs, Winter and Bandit. The Facefaker’s Game is his first novel.
Loading...
or
Not Currently Available for Direct Purchase