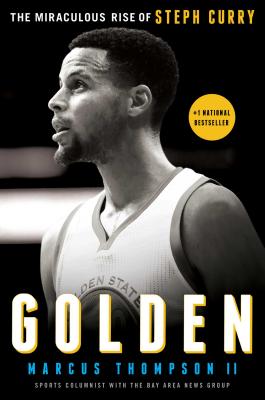 The Miraculous Rise of Steph Curry

“A revolutionary player like Curry—whose three-point shooting altered basketball in a way similar to Babe Ruth changing baseball with the home run—deserves an in-the-moment book. And in the same way so many of Curry’s outlandish shots nestle softly into the net, so Thompson’s engaging and knowing biography successfully finds the mark.” —The Washington Post

Golden is the first book to provide an all-access look at Steph Curry and the team that has fueled Dub Nation—by longtime Warriors beat reporter and Bay Area News Group sports columnist Marcus Thompson, the go-to expert on all things Golden State.

A lifelong Warriors fan turned insider Thompson is uniquely qualified to tell the definitive story of a singular talent, pulling back the curtain on the crazy work ethic and on-court intensity that make Curry great—and the emphasis on family and faith that keeps him grounded.

Combining the competitive grit and fun-loving spirit of his mother with the mild demeanor, easy charm, and sharp shooting of his father, former NBA player Dell Curry, Steph Curry derives support and strength from his close-knit kin and his commitment to Christianity. This hard-working, wholesome image however is both a blessing and curse in a League of big personalities. Thompson unravels the complicated underpinnings of the Steph Curry hate with a nuanced analysis of how class and complexion come into play when a child with an NBA pedigree becomes the face of a sport traditionally honed on inner-city black top and dominated by the less privileged.

With unprecedented access, Thompson draws from exclusive interviews with Steph Curry, his family, his teammates, Coach Steve Kerr, and the Warriors owners to bring readers inside the locker room and courtside with this remarkable athlete and man.

Praise For Golden: The Miraculous Rise of Steph Curry…

"The Warriors are known for tormenting opposing defenses, but let me tell you about someone who's GREAT at covering Stephen Curry: Marcus Thompson. MT2 knows all the stories. He's been courtside for every dribble of Curry's pro career and brings a level of insight and perspective on the Steph Phenomenon ‎that's second to none."--ESPN NBA reporter Marc Stein

"If you are going to listen to what any media person has to say about the Warriors, especially regarding the rise of Steph Curry to superstar status, start with Marcus Thompson. Since I was drafted by the Warriors, no writer has been more plugged in to this journey."- Draymond Green

Marcus Thompson flat out gets basketball and how to write beautifully about it. With Golden, he tells Steph Curry’s story with insights you won’t find anywhere else. He takes you behind the scenes of massive playoff games and deep into the formative moments of Curry’s past. Steph has been the focus of so much media attention that one might assume there’s nothing new to know. They would be quite wrong, as Marcus has unearthed a rich trove that cameras either missed or were never privy to. If you love the NBA, you’ll love this book. --ESPN writer Ethan Sherwood Strauss

Marcus Thompson II is a lead columnist at The Athletic, covering the Golden State Warriors, San Francisco 49ers and Giants, and the Oakland Raiders and A’s. He was previously a sportswriter at the San Jose Mercury News and covered the Warriors exclusively as a beat writer for ten seasons. He lives with his wife, Dawn, and daughter, Sharon, in Oakland, California. He is the author of the national bestseller Golden: The Miraculous Rise of Steph Curry and KD: Kevin Durant’s Relentless Pursuit to Be the Greatest.
Loading...
or
Not Currently Available for Direct Purchase