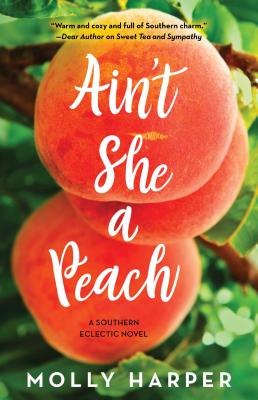 An Atlanta ex-cop comes to sleepy Lake Sackett, Georgia, seeking peace and quiet—but he hasn’t bargained on falling for Frankie, the cutest coroner he’s ever met.

Frankie McCready talks to dead people. Not like a ghost whisperer or anything—but it seems rude to embalm them and not at least say hello.

Fortunately, at the McCready Family Funeral Home & Bait Shop, Frankie’s eccentricities fit right in. Lake Sackett’s embalmer and county coroner, Frankie’s goth styling and passion for nerd culture mean she’s not your typical Southern girl, but the McCreadys are hardly your typical Southern family. Led by Great-Aunt Tootie, the gambling, boozing, dog-collecting matriarch of the family, everyone looks out for one another—which usually means getting up in everyone else’s business.

Maybe that’s why Frankie is so fascinated by new sheriff Eric Linden...a recent transplant from Atlanta, he sees a homicide in every hunting accident or boat crash, which seems a little paranoid for this sleepy tourist town. What’s he so worried about? And what kind of cop can get a job with the Atlanta PD but can’t stand to look at a dead body?

Frankie has other questions that need answering first—namely, who’s behind the recent break-in attempts at the funeral home, and how can she stop them? This one really does seem like a job for the sheriff—and as Frankie and Eric do their best Scooby-Doo impressions to catch their man, they get closer to spilling some secrets they thought were buried forever.

With Ain’t She a Peach, Molly Harper proves once again that she “never lets the reader down with her delightfully entertaining stories” (Single Titles).

Praise For Ain't She a Peach (Southern Eclectic #4)…

“The McCready Family Funeral Home & Bait Shop returns with another round of hilarity and romance in Harper’s second Southern Eclectic novel.”
— –RT Book Reviews on Ain’t She a Peach

"Molly Harper is back in all her snarky glory with Ain’t She a Peach, her second laugh-out-loud full-length book in the Southern Eclectic series."
— Harlequin Junkies on Ain't She a Peach

“[Goes] down as easy as honey on a deep-fried Twinkie.”
— –Library Journal on Sweet Tea and Sympathy

"Warm and cozy and full of Southern charm."
— Dear Author on Sweet Tea and Sympathy

"Witty, snarky, and a whole lot of Southern comfort is wrapped up in this sweet read. Not to be missed!" (5 stars)
— A Midwife Life

“Margot is a terrific lead for Harper’s supporting cast of quirky characters. This is a promising start to Harper’s Southern Eclectic series.”
— Publishers Weekly

"This book is funny and the characters engaging....FInished it in 24 hours and already looking forward to the next in the Southern Eclectic series."
— BookRiot

“Molly Harper is known for writing hilarious scenes, and her unique sense of humor is evident all throughout the story. . . . There are countless laughs in Sweet Tea and Sympathy along with an equal number of heartfelt moments.”
— AlwaysReviewing.com