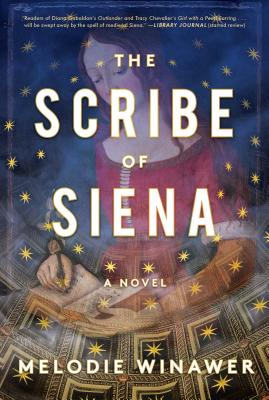 The Scribe of Siena

Readers of Diana Gabaldon’s Outlander and Tracy Chevalier’s Girl with a Pearl Earring…will be swept away by the spell of medieval Siena” (Library Journal, starred review) in this transporting love story and gripping historical mystery.

As Beatrice explores the evidence further, she uncovers the journal and paintings of the fourteenth-century artist Gabriele Accorsi. But when she finds a startling image of her own face, she is suddenly transported to the year 1347. She awakens in a Siena unfamiliar to her, one that will soon be hit by the Plague.

Praise For The Scribe of Siena: A Novel…

“Will remind historical fiction readers of Diana Gabaldon’s Outlander and Tracy Chevalier’s The Girl with the Pearl Earring. Lovers of meticulously researched historical fiction and time-travel narratives will be swept away by the spell of medieval Siena.”
— Library Journal, starred review

“Winawer’s debut is a detailed historical novel, a multifaceted mystery, and a moving tale of improbable love….Winawer has created a prodigious, vibrant tale of past and present that transports readers and fills in the historical gaps. This is a marvelous work of research and invention.”
— Publishers Weekly, starred review

“[A] vivid, compelling debut novel….Winawer renders her story in compelling detail, in Beatrice's whip-smart, observant, often sarcastic voice. Supporting characters in both eras—Ben's neighbor Donata in the present day; the sharp-eyed nun Suor Umiltá in 1347; Gabriele and his family—are also vivid and endearing. The conspiracy is vital as a plot device, but the more resonant theme is Beatrice's deep love for both her centuries and her heartfelt struggle to decide where she belongs.”
— Shelf Awareness

“The realities of day-to-day existence in 1340s Europe are so viscerally represented that readers will readily accept the fanciful premise.”
— Kirkus Reviews

“A stunning work of historical fiction, Melodie Winawer's debut novel [is a] story of love, science, politics, and time-travel is worth every last word.”
— Bustle

“In Melodie Winawer’s The Scribe of Siena, neurosurgeon Beatrice Trovato finds herself mysteriously transported to 14th-century Italy. There she uncovers a plot to destroy the city of Siena. With the Black Plague on its way to ravage Europe, will she make it out in time? And does she want to? After all, she’s fallen in love with medieval life—and a handsome painter. Like Outlander with an Italian accent.”
— Real Simple

“The Scribe of Siena is one part historical mystery and one part love story with a captivating dose of art mixed in for good measure. If that weren't enough, it all comes together in that most evocative of settings: Siena, Italy. Winawer's smart debut is a joy to read!"
— Meg Waite Clayton, New York Times bestselling author of THE WEDNESDAY SISTERS and THE RACE FOR PARIS

Melodie Winawer is the author of The Scribe of Siena, which has been translated into German, Czech, Polish, and Norwegian to critical acclaim. She is also the author of the forthcoming Anticipation. A physician-scientist and associate professor of neurology at Columbia University, Melodie has published over fifty articles and contributed to several anthologies. To find the energy to write, she relies on unflagging enthusiasm and green tea. Melodie lives with her spouse and their three children in both Brooklyn, New York and Ludlow, Vermont.
Loading...
or
Not Currently Available for Direct Purchase