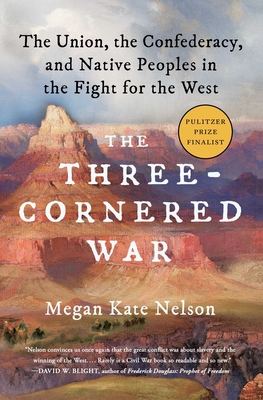 As we learn how these nine charismatic individuals fought for self-determination and control of the region, we also see the importance of individual actions in the midst of a larger military conflict. Based on letters and diaries, military records and oral histories, and photographs and maps from the time, “this history of invasions, battles, and forced migration shapes the United States to this day—and has never been told so well” (Pulitzer Prize–winning author T.J. Stiles).

"Megan Kate Nelson has made an invaluable contribution to broadening our understanding of the Civil War in her riveting new book... [It] is also a timely reminder that the Civil War in the Southwest was not just an interesting tidbit in the history of the American West -- it was part and parcel of the confederate objective of creating an 'empire of slavery' that expanded to the west... The book should be read not only by Civil War buffs and students of the American West, but by anyone who wishes to gain a deeper appreciation of American history that goes beyond the traditional lens. It is a masterful synthesis of military and social history in one of the overlooked chapters of the American Civil War."
—LA Review of Books

"The 'hree-Cornered War sheds a bright light on the forgotten intersection of America's westward expansion and its cataclysmic Civil War. Full of irony, sharp character sketches and fast-paced battle scenes, Megan Kate Nelson's book should be read by anyone who wants to understand the roots of modern America -- or just wants a gripping story, powerfully told."
—Clay Risen, author of The Crowded Hour

Megan Kate Nelson is a writer and historian living in Lincoln, Massachusetts. She has written about the Civil War, US western history, and American culture for The New York Times, The Washington Post, The Atlantic, Time, and Smithsonian Magazine. Nelson earned her BA in history and literature from Harvard University and her PhD in American studies from the University of Iowa. She is the author of Saving Yellowstone, The Three-Cornered War, Ruin Nation, and Trembling Earth.
Loading...
or support indie stores by buying on