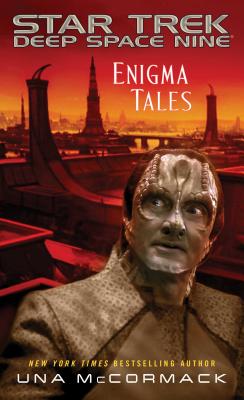 From the New York Times bestselling author of The Fall: The Crimson Shadow comes a compelling and suspenseful tale of politics and power set in the universe of Star Trek: Deep Space Nine.

Elim Garak has ascended to Castellan of the Cardassian Union...but despite his soaring popularity, the imminent publication of a report exposing his people's war crimes during the occupation on Bajor looks likely to set the military against him. Into this tense situation come Dr. Katherine Pulaski—visiting Cardassia Prime to accept an award on behalf of the team that solved the Andorian genetic crisis—and Dr. Peter Alden, formerly of Starfleet Intelligence. The two soon find themselves at odds with Garak and embroiled in the politics of the prestigious University of the Union, where a new head is about to be appointed. Among the front-runners is one of Cardassia’s most respected public figures: Professor Natima Lang. But the discovery of a hidden archive from the last years before the Dominion War could destroy Lang’s reputation. As Pulaski and Alden become drawn into a deadly game to exonerate Lang, their confrontation escalates with Castellan Garak—a conflicted leader treading a fine line between the bright hopes for Cardassia’s future and the dark secrets still buried in its past...

Una McCormack is the author of eight previous Star Trek novels: The Lotus Flower (part of The Worlds of Star Trek: Deep Space Nine trilogy), Hollow Men, The Never-Ending Sacrifice, Brinkmanship, The Missing, the New York Times bestseller The Fall: The Crimson Shadow, Enigma Tales, and The Way to the Stars. She is also the author of four Doctor Who novels from BBC Books: The King’s Dragon, The Way Through the Woods, Royal Blood, and Molten Heart. She has written numerous short stories and audio dramas. She lives with her family in Cambridge, England.
Loading...
or support indie stores by buying on
(This book is on backorder)