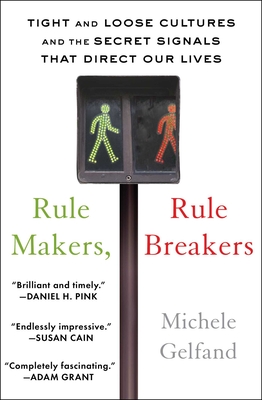 A celebrated social psychologist offers a radical new perspective on cultural differences that reveals why some countries, cultures, and individuals take rules more seriously and how following the rules influences the way we think and act.

In Rule Makers, Rule Breakers, Michele Gelfand, “an engaging writer with intellectual range” (The New York Times Book Review), takes us on an epic journey through human cultures, offering a startling new view of the world and ourselves. With a mix of brilliantly conceived studies and surprising on-the-ground discoveries, she shows that much of the diversity in the way we think and act derives from a key difference—how tightly or loosely we adhere to social norms. Just as DNA affects everything from eye color to height, our tight-loose social coding influences much of what we do.

Why are clocks in Germany so accurate while those in Brazil are frequently wrong? Why do New Zealand’s women have the highest number of sexual partners? Why are red and blue states really so divided? Why was the Daimler-Chrysler merger ill-fated from the start? Why is the driver of a Jaguar more likely to run a red light than the driver of a plumber’s van? Why does one spouse prize running a tight ship while the other refuses to sweat the small stuff?

In search of a common answer, Gelfand spent two decades conducting research in more than fifty countries. Across all age groups, family variations, social classes, businesses, states, and nationalities, she has identified a primal pattern that can trigger cooperation or conflict. Her fascinating conclusion: behavior is highly influenced by the perception of threat.

“A useful and engaging take on human behavior” (Kirkus Reviews) with an approach that is consistently riveting, Rule Makers, Ruler Breakers thrusts many of the puzzling attitudes and actions we observe into sudden and surprising clarity.

Praise For Rule Makers, Rule Breakers: Tight and Loose Cultures and the Secret Signals That Direct Our Lives…

“An engaging writer with intellectual range. She sparkles most when diving into evolutionary anthropology to make sense of long-term patterns…This is interesting stuff.”
—New York Times Book Review

"A fascinating book that offers a fresh way of making sense of cultural differences."
—CNBC

“A brilliant and timely book . . . Michele Gelfand has exposed a universal fault line running beneath nations, states, organizations, and even families. Cultures that face threat and uncertainty seek order and precision. Cultures with firmer footings revel in ambiguity and risk taking. This idea, at once so simple and so powerful, will forever change how you see the world.”
—Daniel H. Pink, bestselling author of When: The Scientific Secrets of Perfect Timing and Drive: The Surprising Truth About What Motivates Us

“A delightful, insightful, and fascinating look at the remarkable diversity of human customs—where they come from and how they shape our lives.”
—Daniel Gilbert, bestselling author of Stumbling on Happiness

“Completely fascinating . . . [Gelfand] reveals how political divides, happiness and suicide rates, and the coexistence of crime and creativity can all be traced to a fundamental but neglected dimension of social norms. You’ll never look at a workplace, a country, or a family the same way again.”
—Adam Grant, bestselling author of Originals, Give and Take, and Option B with Sheryl Sandberg

“Offers a powerful new way of seeing the world. Gelfand's deceptively simple thesis becomes increasingly compelling as her research unfolds across politics, class, and organizational behavior. Best of all, she provides a new toolkit for change."
—Anne Marie Slaughter, President and CEO of New America, former director of Policy Planning for the State Department, and author of Unfinished Business: Women Men Work Family

"Remarkable. Not just an enlightening book but a game-changing one. By uncovering the inner workings of tight and loose cultures, Rule Makers, Rule Breakers suddenly makes sense of the puzzling behavior we see all around us—in colleagues, family, and even ourselves."
—Carol Dweck, bestselling author of Mindset: The New Psychology of Success

"Brilliant . . . full of well-documented insights that will change the way you look at yourself and at the world around you.”
—Barry Schwartz, bestselling author of The Paradox of Choice, Practical Wisdom, and Why We Work

“Gelfand has done much to unravel the mysteries of human motivation."
—Robert Cialdini, bestselling author of Influence and Pre-Suasion

“Everyone should read this book! . . . It is rare that one overarching principle can explain so much, but Michele Gelfand nails it with her brilliant analysis of how tightly or loosely people adhere to social norms. In a fascinating narrative full of entertaining examples, she illuminates and explains this distinction, and by so doing increases our understanding of cultural conflict, the partisan divide, organizational success, happiness, creativity, and much more.”
—Timothy D. Wilson, author of Redirect: Changing the Stories We Live By

“Fascinating and profound . . . It’s quite possibly this year’s best book on culture.”
—Roy F. Baumeister, bestselling coauthor of Willpower and author of The Cultural Animal

“Smart, provocative, and very entertaining . . . Gelfand argues that the tendency to devise and abide by rules, or, alternatively, push behavioral limits is the fundamental distinction between human societies.”
—Paul Bloom, Professor of Psychology, Yale University, author of Against Empathy: The Case for Rational Compassion

“Dazzling . . . When people don’t abide by socially expected rules, families, businesses, and whole societies splinter apart. But is there a downside to following the rules too closely? Read Rule Makers, Rule Breakers to find out.”
—Peter Turchin, author of Ultrasociety: How 10,000 Years of War Made Humans the Greatest Cooperators on Earth

“If you’re going to read one book this year to better understand the world’s problems and what can be done to solve them, Gelfand’s masterpiece should be it.”
—Alon Tal, author of The Land Is Full and founder of the Israeli Union for Environmental Defense

“A thought-provoking look at the contours of modern tribalism—one that uses a deceptively simple dividing line: the split between “tight” and “loose” cultures and personalities.”
—Dante Chinni, coauthor of The Patchwork Nation and Director of the American Communities Project at George Washington University

“A particularly timely analysis for our current Age of Anxiety and uncertainty, where people and nations no longer feel confident in what the next generation and near future will bring.”
—Scott Atran, cofounder of the Center for the Resolution of Intractable Conflicts at Oxford University, and Research Director in Anthropology at the French National Center for Scientific Research

"Fantastic . . . Its beauty derives from the breadth of its insight as Gelfand focuses in to illuminate, in succession, countries, states, corporations, groups and individuals."
—Michael L. Tushman, coauthor of Winning Through Innovation and Lead and Disrupt

“Extremely important . . . Gelfand has identified and explored a hugely significant aspect of culture that accounts for why and when we fall into step with a group, or alternatively, set off on our own path.”
—Richard Nisbett, author of The Geography of Thought: How Westerners and Asians Think Differently…and Why

“Brilliant . . . Gelfand’s findings, which are backed by massive empirical evidence, go far to explain why the people of different countries have different worldviews.”
—Ronald F. Inglehart, Director of the World Values Survey and author of Cultural Evolution

“A must-read book that will fundamentally change the way you look at the world, particularly at our bewildering cultural moment . . . You will emerge a smarter, broader person, with a deeper, more informed perspective for thinking and talking about the issues that consume us all.”
—Todd Kliman, Winner of the MFK Fisher Distinguished Writing Award and author of The Wild Vine

“A valuable lens for decoding the nature of our cultural conflicts and an intriguing new tool for solving them.”
—Colin Woodard, Winner of the George Polk Award, Pulitzer finalist, and author of American Nations: A History of the Eleven Rival Regional Cultures of North America

Michele Gelfand is a Distinguished University Professor of Psychology at the University of Maryland, College Park. Her pioneering research into cultural norms has been cited thousands of times in the press, including in The New York Times, The Washington Post, Harvard Business Review, and Science, and on NPR. The recipient of numerous awards, she is a past president of the International Association for Conflict Management.
Loading...
or support indie stores by buying on