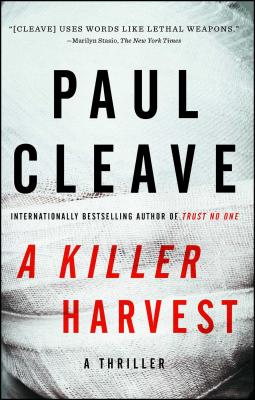 From the Edgar-nominated author of Trust No One and Joe Victim “who uses words like lethal weapons” (Marilyn Stasio, The New York Times), a thriller about a blind teenager who receives a corneal donation and begins to see and feel memories from their previous owner—a homicide detective who was also his father.

Joshua is convinced there is a curse on his family.

It’s taken loved ones from him, it’s robbed him of his eyesight, and it’s the reason why his father was killed while investigating the homicide of a young woman.

Joshua is handed an opportunity he can’t refuse: an operation that will allow him to see the world through his father’s eyes. As Joshua navigates a realm of sight, he gets glimpses of what these eyes might have witnessed in their previous life. What, exactly, was his dad up to in his role as a police officer? And what, exactly, were the circumstances surrounding his death?

There are consequences to the life his father was living, including the wrath of a man hell-bent on killing, a man who is drawing closer and closer to Joshua. Soon, Joshua discovers a world even darker than the one he has emerged from—a world in which the gift of sight comes with dire, dangerous consequences that threaten everything that Joshua holds dear.

A riveting thriller filled with hidden secrets and unspeakable horrors that will keep you guessing until the very last page, A Killer Harvest is a “powerful, thought-provoking novel” (Publishers Weekly, starred review).

Praise For A Killer Harvest: A Thriller…

Praise for A Killer Harvest:

"Starting with a macabre setup, Cleave keeps upping the stakes till any scrap of plausibility is left far behind and only an increasingly effective series of hair-raising thrills remains."
— Kirkus Reviews

“Cleave, a master of dark and compelling thrillers, puts a moral spin on this twisting, chilling tale with its disturbing finale.”
— Booklist

Paul Cleave is the internationally bestselling author of ten award-winning crime thrillers, including Joe Victim, which was a finalist for the 2014 Edgar and Barry Awards, Trust No One and Five Minutes Alone, which won consecutive Ngaio Marsh Awards in 2015 and 2016. He lives in Christchurch, New Zealand. Visit his website at PaulCleave.com.
Loading...
or support indie stores by buying on