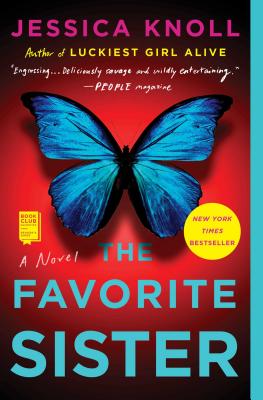 From the author of Luckiest Girl Alive comes the “engrossing” (People) New York Times bestseller starring two sisters who join the cast of a reality TV series…and only one will make it out alive.

Brett and Kelly have always toed the line between supportive sisters and bitter rivals. Growing up, Brett was the problem child, living in the shadow of the brilliant and beautiful Kelly. In adulthood, all that has changed. Kelly is a struggling single mother and Brett has skyrocketed to meteoric success that has been chronicled on a reality TV show called Goal Diggers.

When Kelly manipulates her way onto the show and into Brett’s world, Brett is wildly threatened. Kelly, and only Kelly, knows her younger sister’s appalling secret, one that could ruin her.

Jessica Knoll is the New York Times bestselling author of Luckiest Girl Alive, which is soon to be a major motion picture from Netflix starring Mila Kunis. She has been a senior editor at Cosmopolitan and the articles editor at Self. She grew up in the suburbs of Philadelphia and graduated from The Shipley School in Bryn Mawr, Pennsylvania, and from Hobart and William Smith Colleges in Geneva, New York. She lives in Los Angeles with her husband and her bulldog, Beatrice. The Favorite Sister is her second novel.
Loading...
or support indie stores by buying on