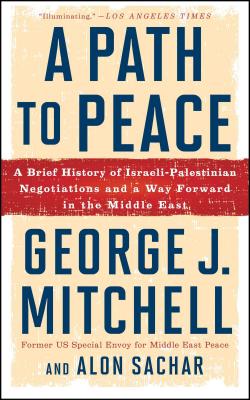 A Path to Peace

The “illuminating” (Los Angeles Times) answer to why Israel and Palestine’s attempts at negotiation have failed and a practical, “admirably measured” (The New York Times) roadmap for bringing peace to the Middle East—by an impartial American diplomat experienced in solving international conflicts.

George Mitchell knows how to bring peace to troubled regions. He was the primary architect of the 1998 Good Friday Agreement for peace in Northern Ireland. But when he served as US Special Envoy for Middle East Peace from 2009 to 2011—working to end the Israeli-Palestinian conflict—diplomacy did not prevail. Now, for the first time, Mitchell offers his insider account of how the Israelis and the Palestinians have progressed (and regressed) in their negotiations through the years and outlines the specific concessions each side must make to finally achieve lasting peace.

Praise For A Path to Peace: A Brief History of Israeli-Palestinian Negotiations and a Way Forward in the Middle East…

"Illuminating.... Shows the extent of [the] challenge, even for a veteran negotiator."

“Well-written and remind[s] even aficionados of details of Israeli history.”

George J. Mitchell served as a Democratic senator from Maine from 1980 to 1995 and Senate majority leader from 1989 to 1995. He was the primary architect of the 1998 Good Friday Agreement for peace in Northern Ireland, chairman of The Walt Disney Company, US Special Envoy for Middle East Peace, and the author of the Mitchell Report on the use of performance-enhancing drugs in baseball, as well as the books The Negotiator and A Path to Peace. He was awarded the Presidential Medal of Freedom in 1999.

Alon Sachar has worked to advance Middle East peace under two US administrations. He served as an adviser to the US Ambassador to Israel, Daniel B. Shapiro in Tel Aviv from 2011-2012, and to President Obama’s Special Envoys for Middle East Peace, George J. Mitchell and David Hale, from 2009 to 2011. In those capacities, Alon participated in negotiations with Israelis, Palestinians, and Arab states. From 2006 to 2009, he served in the State Department’s Bureau of Near Eastern Affairs, focusing on the US bilateral relationships with Israel and the Palestinians as well as Arab-Israeli relations. Alon has also worked out of the US Consulate in Jerusalem, which serves as the US diplomatic mission to the Palestinians. Today, Alon is a lawyer based in California where he was born and raised. He is the author, with George J. Mitchell, of A Path to Peace.
Loading...
or
Not Currently Available for Direct Purchase