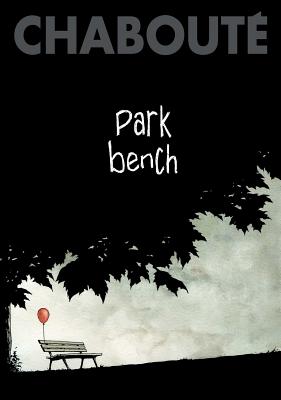 From its creation, to its witness to the fresh ardor of lovers, the drudgery of businessmen, the various hopes of the many who enter its orbit, the park bench weathers all seasons. Strangers meet at it for the first time. Paramours carve their initials into it. Old friends sit and chat upon it for hours. Others ignore the bench, or (attempt to) sleep on it at night, or simply anchor themselves on it and absorb the ebb and flow of the area and its people.

Christophe Chabouté’s mastery of the visual medium turns this simple object into a thought-provoking and gorgeously wrought meditation on time, desire, and the life of communities all across the planet. This could be a bench in my hometown or yours—the people in this little drama are very much those we already recognize.

Christophe Chabouté published his first work, Stories, based on the work of Arthur Rimbaud, in 1993 in France. Since then, he has received numerous prizes for his very personal illustration and storytelling style. When Alone, a wholly original work of his, published in France, it was widely hailed as his masterpiece and was an Official Selection at France’s prestigious Angoulême International Comics Festival. He is the illustrator-storyteller of Park Bench.
Loading...
or support indie stores by buying on
(This book is on backorder)