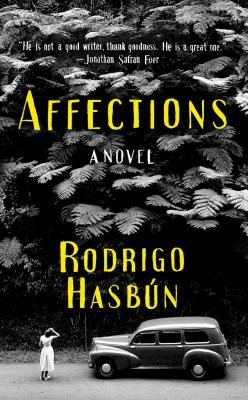 A haunting novel about an unusual family’s breakdown—set in South America during the time of Che Guevara and inspired by the life of Third Reich cinematographer Hans Ertl—from the literary star Jonathan Safran Foer calls, “a great writer.”

Set against the backdrop of the both optimistic and violent 1950s and 1960s, Affections traces the Ertls’s slow and inevitable breakdown through the various erratic trajectories of each family member: Hans’s undertakings of colossal, foolhardy projects and his subsequent spectacular failures; his daughter Monika, heir to his adventurous spirit, who joins the Bolivian Marxist guerrillas and becomes known as “Che Guevara’s avenger”; and his wife and two younger sisters left to pick up the pieces in their wake. In this short but powerful work, Hasbún weaves a masterfully layered tale of how a family’s voyage of discovery ends up eroding the affections that once held it together.

“Hasbún never tricks the readers, but he surprises them, and displays his heroes with a sort of warm coldness which plays with our curiosity and lets us freely imagine what’s left unsaid.” —Goffredo Fofi, Internazionale (Italy)

Sophie Hughes has translated novels by several contemporary Latin American and Spanish authors, including award-winning Laia Jufresa and Rodrigo Hasbún. Her translations and writing have been published in The Guardian, The Times Literary Supplement, Literary Hub, and The White Review, among others. In 2017 Sophie was awarded a PEN/Heim Translation Fund Grant.
Loading...
or
Not Currently Available for Direct Purchase