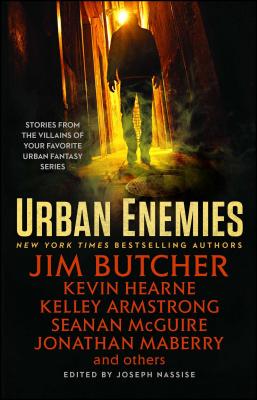 Villains have all the fun—everyone knows that—and this anthology takes you on a wild ride through the dark side! The top villains from seventeen urban fantasy series get their own stories—including the baddies of New York Times bestselling authors Jim Butcher, Kevin Hearne, Kelley Armstrong, Seanan McGuire, and Jonathan Maberry.

For every hero trying to save the world, there’s a villain trying to tear it all down.

In this can’t-miss anthology edited by Joseph Nassise (The Templar Chronicles), you get to plot world domination with the best of the evildoers we love to hate! This outstanding collection brings you stories told from the villains' point of view, imparting a fresh and unique take on the evil masterminds, wicked witches, and infernal personalities that skulk in the pages of today’s most popular series.

“Balanced and entertaining . . . Fans of urban fantasy can read stories from some of their best-known names in the genre and discover new writers in this well-arranged anthology, which focuses on villains. In Jim Butcher’s “Even Hand,” the human crime lord who has been a thorn in wizard Harry Dresden’s side gets his due in an amusing story that pokes some fun at the long-running Dresden Files series. Other highlights include “Hounded” by Kelly Armstrong; Carrie Vaughn’s “Bellum Romanum,” featuring an immortal Roman centurion who wants to see the world burn; and the deliciously wicked “Balance” by Seanan McGuire, set in her InCryptid world.”
— Publishers Weekly

“Butcher is the dean of contemporary urban fantasy.”
— Booklist on Jim Butcher

“Heartbreaking . . . Somers conjures a riveting setting that bends and breaks time and again, each iteration raising the stakes for his accidental hero. By turns frightening and sorrowful, this is a story that offers no good choices to its characters. The ever-present violence is balanced by compassion, which in turn is eroded by the grim fight to save humankind.”
— Publishers Weekly on Jeff Somers’ Ustari Cycle

Jonathan Maberry is a New York Times bestselling author, five-time Bram Stoker Award winner, and comic book writer. He writes in multiple genres including suspense, thriller, horror, science fiction, fantasy, and adventure; and he writes for adults, teens, and middle grade. His works include the Joe Ledger thrillers, Glimpse, the Rot & Ruin series, the Dead of Night series, The Wolfman, The X-Files Origins: Devil’s Advocate, Mars One, and many others. Several of his works are in development for film and TV, including V Wars, which is a Netflix original series. He is the editor of high-profile anthologies including the X-Files books, Aliens: Bug Hunt, Out of Tune, Hardboiled Horror, Baker Street Irregulars, Nights of the Living Dead, and others. He lives in Del Mar, California. Visit him at JonathanMaberry.com and on Twitter (@JonathanMaberry) and Facebook.

Jeff Somers was born in Jersey City, New Jersey. After graduating college he wandered aimlessly for a while, but the peculiar siren call of New Jersey brought him back to his homeland. Visit him at JeffreySomers.com and WeAreNotGoodPeople.com, and on Twitter at @JeffreySomers.

Joseph Nassise is the New York Times and USA TODAY bestselling author of more than thirty novels, including the internationally bestselling Templar Chronicles series, the Jeremiah Hunt trilogy, and the Great Undead War series. He also writes epic fantasy under the pseudonym Matthew Caine. He’s a multiple Bram Stoker Award and International Horror Guild Award nominee and his work has been translated into seven languages.
Loading...
or support indie stores by buying on