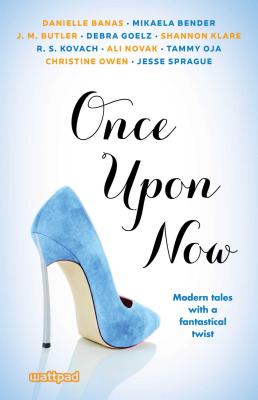 An exclusive collection of new modern tales with a fantastical twist, from some of the most beloved writers on Wattpad.

Discover this anthology of everyday stories influenced by fairytales and mythology—from ten Wattpad authors, all voted by the site’s users, featuring your favorite celebrities, all with a touch of fantasy and whimsy. If you enjoyed the collection Imagines, you’ll love Once Upon Now!

Debra Goelz (@brittaniecharmintine on Wattpad) is a refugee from Hollywood. She served for ten years as a financial executive for such companies as Universal Pictures, Dino de Laurentiis, and Jim Henson Productions. Her performing career began and ended with her puppeteering a chicken during the closing scene in Muppet Treasure Island. Her YA humorous fantasy written under the pseudonym Brittanie Charmintine, Mermaids and the Vampires Who Love Them, won a Watty Award in 2014. She lives in a redwood forest in rural Marin County with her husband and dog. Her two children have abandoned her to seek a college education in New York.

R. S. Kovach is an art historian and senior financial administrator who’s worked at universities across three continents. She lives with her husband and three boys in the greater Washington, DC area. Find out more at Facebook.com/RSKovach.Author.
Loading...
or
Not Currently Available for Direct Purchase