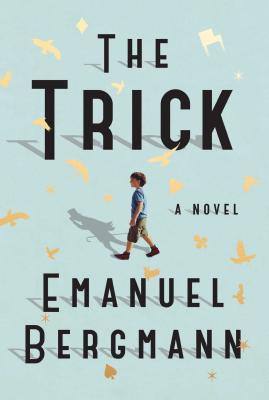 In 1934, a rabbi’s son in Prague joins a traveling circus, becomes a magician, and rises to fame under the stage name the Great Zabbatini just as Europe descends into World War II. When Zabbatini is discovered to be a Jew, his battered trunk full of magic tricks becomes his only hope of surviving the concentration camp where he is sent.

Seven decades later in Los Angeles, ten-year-old Max finds a scratched-up LP that captured Zabbatini performing his greatest tricks. But the track in which Zabbatini performs his love spell—the spell Max believes will keep his disintegrating family together—is damaged beyond repair. Desperate for a solution, Max seeks out the now elderly, cynical magician and begs him to perform his magic on his parents. As the two develop an unlikely friendship, Moshe discovers that Max and his family have a surprising connection to the dark, dark days the Great Zabbatini experienced during the war.

Recalling the melancholy humor of Isaac Bashevis Singer and the heartbreaking pathos of the film Life is Beautiful—this outstanding first novel is at once an irreverent yet deeply moving story about a young boy who believes in magic and a disillusioned old man who believes in nothing, as well as a gripping and heartfelt tale about the circle of life.

Emanuel Bergmann was born in Germany and is a journalist and translator. He has been living in Los Angeles since 1990. His first novel, The Trick, was an international bestseller.

Praise For The Trick: A Novel…

“The Trick is a lyrical, uplifting, and funny story that will tug at all of your heartstrings.  A true miracle from the first to the last page.”
— Armando Lucas Correa, bestselling author of The German Girl

“Emanuel Bergmann is a formidable writer and he has meticulously weaved the story with two great characters. You will enjoy this brilliantly written debut novel no matter what your mood and age are.”
— The Washington BookReview

“A poignant story about one’s true worth.”
— Historical Novel Society

“By turns sentimental and quirky, The Trick has much to love, most notably a charming intergenerational friendship between a boy who clings to his magical thinking and a disillusioned old grouch. . . Bergmann packs in enough magic and miracles to leave the reader under his spell.”
— Shelf Awareness

“Bergmann’s novel, a pleasing blend of Sara Gruen’s Water for Elephants and Jonathan Safran Foer’s Everything is Illuminated, puts magic back into everyday life.”
— Booklist

"The twin stories of Max and the octogenarian born Moshe Goldenhirsch in Prague will mesmerize readers as they move ever closer to the finale. While Max hunts down his quarry, I was envisioning the fortune-telling machine at the heart of the Tom Hanks film Big, but the images Bergmann creates are eerier and more devastating in his exceptional work."
— Library Journal

“Bergmann’s storytelling is a feat of magic in and of itself.”
— RT Book Reviews

“A lovely story . . . A tale for those who continue to look for magic in the world.”
— New York Journal of Books

"The tragedy of the past weaves together with humor, love, and a belief in the impossible in The Trick."
— BookPage

“A wonderful, inspiring book. Don’t miss it.”
— The Jerusalem Post

"As I flipped the pages, I was reminded of the best magic of all: love's ability to turn our greatest disappointments into our biggest blessings."
— Alex Pollock, First for Women Magazine
or
Not Currently Available for Direct Purchase
Copyright © 2020 American Booksellers Association