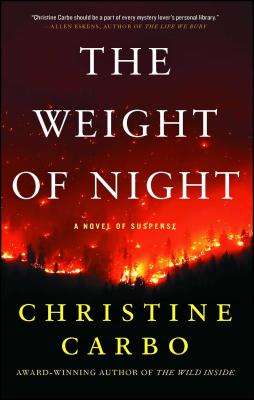 The Weight of Night (Paperback)

On most days, the wilderness gave me peace. But not tonight.

In a land sculpted by glaciers, the forest is on fire. Thick smoke chokes the mountain air and casts an apocalyptic glow over the imposing peaks and vistas of Montana’s Glacier National Park. When firefighters are called in to dig firebreaks near the small town bordering the park, a crew member is shocked to unearth a shallow grave containing human remains.

Park Police Officer Monty Harris is summoned to the site to conduct an excavation. But with an incendiary monster threatening to consume the town, Monty seeks help from Gretchen Larson, the county’s lead crime scene investigator.

While the two work frantically to determine the true identity of the victim, a teenager suddenly disappears from one of the campgrounds in Glacier. Could the cases somehow be connected? As chances for recovery of the missing boy grow slimmer and the FBI finds only dead ends, Gretchen and Monty desperately race to fit all the pieces together while battling time, the elements, and their own unresolved inner conflicts.

The Weight of Night is the latest novel in an award-winning series which “paints a moving picture of complex, flawed people fighting to make their way in a wilderness where little is black or white” (Publishers Weekly). It is a gripping tribute to the power of redemption set against one of America’s most majestic and unforgiving landscapes.

Christine Carbo is the author of The Wild Inside, Mortal Fall, and The Weight of Night. A Florida native, she and her family live in Whitefish, Montana. Find out more at ChristineCarbo.com.

Praise For The Weight of Night: A Novel of Suspense (Glacier Mystery Series #3)…

“Carbo creates a vivid setting and strong characters, as well as a stunning mystery. Fans of page-turning suspense will find this book impossible to put down.”
— RT Book Reviews

“Carbo extols the beauty of her setting and provides sensitive character development.”
— Booklist

"If Mortal Fall were just a beautifully written, sharp-eyed procedural, that would be reason enough to read it. But Christine Carbo offers so much more in this fine second novel. It’s a study of flawed, compelling characters and the ghosts that haunt them. It’s also a fascinating look at the relationship of humans with the too-rapidly changing landscape of Glacier Park. And finally, it’s the tragic story of the forces that can shatter a family. This novel works on so many levels, all of them masterfully crafted."
— William Kent Krueger, New York Times bestselling author of Windigo Island

“Carbo paints a moving picture of complex, flawed people fighting to make their way in a wilderness where little is black or white, except the smoky chiaroscuro of the sweeping Montana sky.”
— Publisher’s Weekly

“Mortal Fall is a terrific read. With a masterful hand, Christine Carbo guides her readers through an intriguing mystery full of complex relationships and smartly-developed characters. Her rich descriptions immerse you in the grandeur of Glacier National Forest as this riveting story unfolds. Christine Carbo should be a part of every mystery-lover’s personal library.”
— Allen Eskins, author of The Guise of Another

“Carbo brings subtlety and sensitivity to the smallest of moments.”
— Booklist

Praise for The Wild Inside:“...stays in your mind long after you’ve put the book down. I’m still thinking about it. Prepare to run the gamut of emotions with this fine treat of a story. Then, in the years ahead, be on the lookout for more from this fresh new voice in the thriller genre.”

"Fans of Nevada Barr will love this tense, atmospheric thriller with its majestic Glacier National Park setting. The Wild Inside is a stunning debut!"
— Deborah Crombie, New York Times bestselling author of TO DWELL IN DARKNESS

“An intense and thoroughly enjoyable thrill ride. Christine Carbo’s literary voice echoes with her love of nature, her knowledge of its brutality, and the wild and beautiful locale of Montana. The Wild Inside is a tour de force of suspense that will leave you breathlessly turning the pages late into the night.”
— Linda Castillo, New York Times bestselling author of THE DEAD WILL TELL

“The brutality and fragility of Glacier National Park’s wilderness provides the perfect backdrop for this well-crafted, absorbing novel about the barbarities and kindnesses of the humans living on its edge. Christine Carbo is a writer to watch.”
— Tawni O'Dell, New York Times bestselling author of One of Us

“Sharp, introspective Systead is a strong series lead, and Carbo rolls out solid procedural details, pitting him against Department of the Interior bureaucrats. The grittiness of the poverty-wracked area surrounding Glacier plays against the park’s dangerous beauty in this dark foray into the wilderness subgenre. Put this one in the hands of those who enjoy Paul Doiron’s Mike Bowditch novels and Julia Keller’s Bell Elkins series.”
— Booklist
or
Buy Here
Copyright © 2020 American Booksellers Association