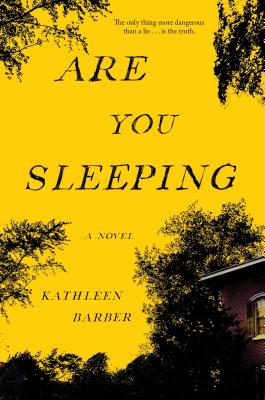 Serial meets Ruth Ware’s In A Dark, Dark Wood in this inventive and twisty psychological thriller about a mega-hit podcast that reopens a murder case and threatens to unravel the carefully constructed life of the victim’s daughter.

The only thing more dangerous than a lie...is the truth.

Josie Buhrman has spent the last ten years trying to escape her family’s reputation and with good reason. After her father's murder thirteen years prior, her mother ran away to join a cult and her twin sister Lanie, once Josie’s closest friend and confidant, betrayed her in an unimaginable way. Now, Josie has finally put down roots in New York, settling into domestic life with her partner Caleb, and that’s where she intends to stay.

When investigative reporter Poppy Parnell sets off a media firestorm with a mega-hit podcast that reopens the long-closed case of Josie’s father’s murder, Josie’s world begins to unravel. Meanwhile, the unexpected death of Josie’s long-absent mother forces her to return to her Midwestern hometown where she must confront the demons from her past—and the lies on which she has staked her future.

Praise For Are You Sleeping: A Novel…

“..[An] inventive debut…The intense plot and character studies are enhanced by the emotional look at the dynamics of a family forever scarred by violence."
— Publishers Weekly starred review

"Barber is a delightful writer who has produced a taut thriller that will leave you wondering the identity of the killer. My prediction: the book is destined for the New York Times best seller list."
— Chicago Tribune

"I was completely hooked from the very fist page. Layers of deceit, family drama, a murdered father, a disturbed mother, mayhem, cults, lies, betrayals, and a possibly deranged podcaster--this story has it all. Lanie and Josie are Janus twins, and their twisting lives left me breathless. Who to trust? Who to believe? Who really killed their father? ARE YOU SLEEPING taps into our collective conscience with a true crime podcast propelling the narrative and takes an unflinching look at the truths we create about ourselves. Kathleen Barber is a fabulous new author to watch. If you like twisty psychological thrillers, this is your book."
— J.T. Ellison, bestselling co-author of THE DEVIL'S TRIANGLE

"Kathleen Barber perfectly captures the media frenzy around a notorious murder and the inclusion of a podcast adds an extra layer of timely eeriness. The public perception is contrasted flawlessly against the element of private pain, such that the “public” itself becomes a fully developed character. Beautifully and sympathetically written, ARE YOU SLEEPING? is a murder whodunit, a social commentary, and an exploration of sisterly bonds all in one."
— Kate Moretti, author of The Vanishing Year

“Are You Sleeping will more than likely keep you up all night as this most compelling suspenseful novel unfolds. A classic whodunnit gets a very clever modern treatment that left this reader's heart racing right up to the last page.”
— --Liz Nugent, author of Unraveling Oliver

“Reminiscent of the hit podcast Serial, this debut is an exciting read about what happens when the past continues to haunt the present.”
— Dallas News

"Anyone who has fallen head-first into a podcast such as "S-Town" or "Serial" will appreciate the plot of Kathleen Barber's novel."
— --Houston Chronicle

"Ripped from the headlines of an on-line pod cast that reopens murder cases, this really well written psychological thriller moves rapidly through time as it unravels the circumstances surrounding a small town murder."
— Fiction Addiction

"Josie's dark past becomes fodder for the podcast du jour--if that doesn't hook you, the twist will."
— Cosmopolitan

“An excellent examination of what it must be like to be caught up in a media frenzy…absorbing reading for those who can’t get enough of flawed-but-likable narrators.”
— Booklist

“…showing how complicated the truth can be when people have different levels of investment in it. Dark. Moving. Timely.”
— Oprah.com

“ARE YOU SLEEPING, reels the reader in and keeps us wondering until the very end…dives into the complexities of relationships, and the value of love and connection, especially in the face of tragedy and despair.”
— BookReporter

"Verdict: Barber weaves a twisty tale that will grip readers as they follow Josie confronting a past she finally cannot escape. Highly recommended for fans of the podcast Serial and authors such as Ruth Ware and Paula Hawkins."
— Library Journal, starred review

Kathleen Barber’s first novel, Truth Be Told (formerly titled Are You Sleeping), has been adapted for television by Reese Witherspoon’s Hello Sunshine. Kathleen was raised in Galesburg, Illinois, and is a graduate of the University of Illinois and Northwestern University School of Law. She lives in Washington, DC, with her husband and son. Follow Me is her second novel.
Loading...
or
Not Currently Available for Direct Purchase