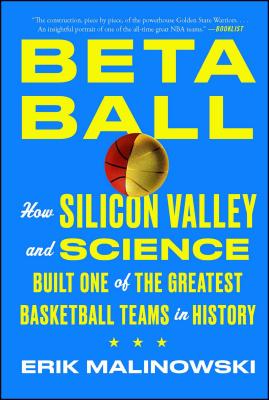 “As lively, thorough, and engaging as the team it chronicles” (Nathaniel Friedman), Betaball is a compelling look at how the Golden State Warriors embraced savvy business practices, next generation science, and Silicon Valley’s technocentric culture not only to produce one of the greatest basketball teams in history but also to revolutionize the NBA—perfect for fans of Moneyball and The Book of Basketball.

Betaball is the definitive, inside account of how the Golden State Warriors, under the ownership of venture capitalist Joe Lacob and Hollywood producer Peter Guber, quickly became one of the greatest success stories in both sports and business.

In just five years, they turned a declining franchise with no immediate hope into the NBA’s dominant force—and facilitated the rise of All-Star point guard Stephen Curry. By operating in “beta,” the Warriors morphed into a model organization for American professional sports, instituting the best workplace principles found inside the world’s most successful corporations, and instilling a top-down organizational ethos that allows employees—from the front office to the free-throw line—to thrive.

With in-depth access and meticulous reporting on and off the court, acclaimed journalist Eric Malinowski recounts a gripping tale of a team’s reinvention, of worlds colliding, of ordinary people being pushed to extraordinary heights, and the Golden State Warriors’ chase for a second straight NBA championship during the 2015-’16 season. Betaball is “a book for fans of all sports and science, business and analytics, Silicon Valley and Wall Street, front offices and locker rooms, money and winning” (Don Van Natta Jr., ESPN reporter and New York Times bestselling author).

Praise For Betaball: How Silicon Valley and Science Built One of the Greatest Basketball Teams in History…

“A book for fans of all sports and science, business and analytics, Silicon Valley and Wall Street, front offices and locker rooms, money and winning. And it’s a helluva lot of fun. Buckle up for the sports book of the year.”

“Betaball chronicles the best NBA story of the last 20 years thoroughly, but with humor, grace and detail. The Warriors deserved a great book written about them. Now they have one."
— Will Leitch, author of Are We Winning? and God Save The Fan, senior writer Sports On Earth and founder of Deadspin

“Betaball delivers rich detail on every transaction, every jumper, every seminal moment that made the Warriors into champions.”
— Jonah Keri, New York Times bestselling author of The Extra 2%

“In Betaball, Erik Malinowski displays a keen eye for the important moments where sport and technology have merged in Silicon Valley to create basketball nirvana. . . . A must-read narrative for any serious basketball fan.”

"Impressively researched and skillfully crafted, Betaball will open your eyes to all that it takes to build a winning culture."
— George Dohrmann, Pulitzer Prize-Winning author of Play Their Hearts Out

"As lively, thorough, and engaging as the team it chronicles."
— Nathaniel Friedman, co-author of the The Undisputed Guide to Pro Basketball History and The Macrophenomenal Pro Basketball Almanac

"Malinowski has laid out the construction, piece by piece, of the powerhouse Golden State Warriors...An insightful portrait of one of the all-time great NBA teams."
— Booklist

Erik Malinowski is a nationally recognized freelance journalist based in the Bay Area who has been published in Wired, Rolling Stone, Slate, Atlas Obscura, Sports on Earth, Uproxx, Esquire, Vocativ, Sporting News, The New Republic, and Baseball Prospectus. He is a frequent guest on NPR’s “Only a Game” and his work has appeared in Best American Sports Writing three years running.
Loading...
or support indie stores by buying on