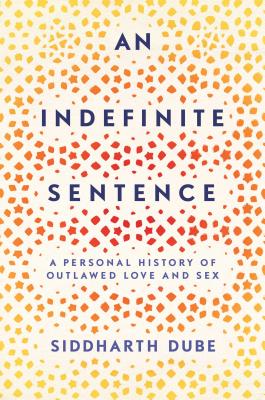 A Personal History of Outlawed Love and Sex

Finalist for the 2020 Lambda Literary Award in Gay Memoir/Biography

A revelatory memoir about sex, oppression, and the universal struggle for justice.

From his time as a child in 1960s India, Siddharth Dube knew that he was different. Reckoning with his femininity and sexuality—and his intellect—would send him on a lifelong journey of discovery: from Harvard classrooms to unsafe cruising sites; from ivory-tower think-tanks to shantytowns; from halls of power at the UN and World Bank to jail cells where sexual outcasts are brutalized.

Coming of age in the earliest days of AIDS, Dube was at the frontlines when that disease made rights for gay men and for sex workers a matter of basic survival, pushing to decriminalize same-sex relations and sex work in India, both similarly outlawed under laws dating back to British colonial rule. He became a trenchant critic of the United States’ imposition of its cruel anti-prostitution policies on developing countries—an effort legitimized by leading American feminists and would-be do-gooders—warning that this was a 21st century replay of the moralistic Victorian-era campaigns that had spawned endless persecution of countless women, men, and trans individuals the world over.

Profound, ferocious, and luminously written, An Indefinite Sentence is both a personal and political journey, weaving Dube’s own quest for love and self-respect with unforgettable portrayals of the struggles of some of the world’s most oppressed people, those reviled and cast out for their sexuality. Informed by a lifetime of scholarship and introspection, it is essential reading on the global debates over sexuality, gender expression, and of securing human rights and social justice in a world distorted by inequality and right-wing ascendancy.

Praise For An Indefinite Sentence: A Personal History of Outlawed Love and Sex…

Praise for An Indefinite Sentence

"[A] heart-stopping memoir of being gay in India and the world. . . . [A]lthough this is a personal memoir, it is also a memoir of work. Work helped Dube find himself. And work allowed him to live a life he could be proud of. It’s in combining his personal story with the ravages of AIDS he witnessed that Dube advances the genre of queer memoirs in India. . . . Dube gives his readers the substantial gift of hope. The sentiment is, in fact, the spine of his memoir." —New York Times Book Review

“A public health visionary gets personal with a powerful exploration of 'the beguiling possibilities of gender beyond the conventional bipolarity of male and female, and the mysterious, limitless permutations of sexual desire. Much of the book . . . reads like a novel . . . A gripping memoir about a gay man with feet in India and the U.S. as well as a book about how to put together a life.” —Kirkus Reviews

"Dube’s book is rich in style and education. This is so much more than a memoir of a gay man’s life growing up in India and the United States. It is also a firsthand account of the lives of sexual minorities in the two countries... I found this to be more than a memoir; it is a total experience." —Reviews by Amos Lassen

"The prose with which Dube tells his story [is] soft and formal but with elegant slang and a very surprising willingness to use profanity in a matter-of-fact way that still feels like a slap. Dube shares his life and his travels by mixing shades of his faith along with tales of men he loved platonically and otherwise, female sex workers who bore the most blame on the spread of disease and the politics of and attitudes toward AIDS around the world. This, too, is told with outraged mindfulness that feels like a burning torch wrapped in tranquility. It’s stirring and calming, funny and sad and easily sustains interest throughout." —Washington Blade

“The prose with which Dube tells his story [is] soft and formal but with elegant slang and a very surprising willingness to use profanity in a matter-of-fact way that still feels like a slap. . . . It’s stirring and calming, funny and sad.” —Dallas Voice

"Insightful . . . memorable and especially valuable as a contribution to the body of AIDS literature."— Booklist

“An unflinchingly honest account of private marginalization that opens up to a bigger world of public and communal discrimination against sexual minorities, Dube’s book is intransigent in its truth-telling, eye-opening in its revelations, and capacious in its compassion.”— Neel Mukherjee, Booker Prize finalist for The Lives of Others

"A frank personal memoir of a sex life hedged round with stigma and legal constraint -- in both India and the U. S. -- Siddharth Dube's An Indefinite Sentence is also a much larger book: an outraged story of how law and culture interfere with, but can potentially support, human lives. A globally recognized activist for the prevention and treatment of HIV/AIDS. Dube has channeled his personal struggle into committed advocacy on behalf of others -- not only sexual minorities but also sex workers. Eloquent, fascinating, and profoundly moving."— Martha C. Nussbaum

“An Indefinite Sentence bears witness to the long struggle against homophobia; it is also a vital, up to date record of gay rights and AIDS relief activism worldwide. Its rich perspective makes clear that anyone who still thinks criminalising sex work is an effective strategy to uphold human dignity needs to read this moving, impressive and necessary book.”— Preti Taneja, Desmond Elliot Prize winner for We That Are Young

"More than a memoir of a gay man’s life growing up in India and the United States...a firsthand account of the lives of sexual minorities in these two countries."

"[One of the] year's best books....journalist Siddharth Dube's brave, sensitively told coming-of-age account as an upper class gay man and the persecution he faced."

"Probably one of the most important (books for our times)…Both fierce and tender, it will leave the reader enraged and heartened."
— Hindu Business Line

"Dube is privileged and a pariah at the same time. It is this insider-outsider perspective, the difficult choices he made, and his deep empathy with those less privileged that gives the pages of the book their punch."
— Asian Age

Select International Praise for In The Land of Poverty: The Memoirs of an Indian Family, 1947-1997

“An extraordinary study of the human dimensions of poverty and development. Destined to become a classic.”— Shashi Tharoor, author of Inglorious Empire: What the British Did to India

“A deeply illuminating study of poverty in India, seen in concrete detail [and] made vividly real by remarkable descriptive skill.”— Amartya Sen, Nobel laureate in economics

Born in Kolkata, India, Siddharth Dube is widely known for his writing on AIDS, public health, and poverty. He is a graduate of Tufts University, the University of Minnesota’s School of Journalism, and the Harvard School of Public Health. He has since been a visiting fellow at the Centre for the Study of Developing Societies in Delhi, scholar-in-residence at Yale University’s Center for Interdisciplinary Research on AIDS, senior adviser to the Executive Director of UNAIDS, and a senior fellow at the World Policy Institute in New York City. Visit SiddharthDube.com.
Loading...
or support indie stores by buying on