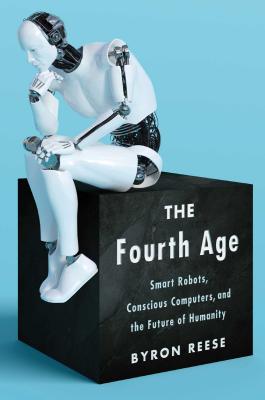 Smart Robots, Conscious Computers, and the Future of Humanity

“The Fourth Age not only discusses what the rise of A.I. will mean for us, it also forces readers to challenge their preconceptions. And it manages to do all this in a way that is both entertaining and engaging.” —The New York Times

As we approach a great turning point in history when technology is poised to redefine what it means to be human, The Fourth Age offers fascinating insight into AI, robotics, and their extraordinary implications for our species.

In The Fourth Age, Byron Reese makes the case that technology has reshaped humanity just three times in history:

- 10,000 years ago, we developed agriculture, which led to cities and warfare.

- 5,000 years ago, we invented the wheel and writing, which lead to the nation state.

We are now on the doorstep of a fourth change brought about by two technologies: AI and robotics. The Fourth Age provides extraordinary background information on how we got to this point, and how—rather than what—we should think about the topics we’ll soon all be facing: machine consciousness, automation, employment, creative computers, radical life extension, artificial life, AI ethics, the future of warfare, superintelligence, and the implications of extreme prosperity.

By asking questions like “Are you a machine?” and “Could a computer feel anything?”, Reese leads you through a discussion along the cutting edge in robotics and AI, and, provides a framework by which we can all understand, discuss, and act on the issues of the Fourth Age, and how they’ll transform humanity.

Praise For The Fourth Age: Smart Robots, Conscious Computers, and the Future of Humanity…

“The Fourth Age not only discusses what the rise of A.I. will mean for us, it also forces readers to challenge their preconceptions. And it manages to do all this in a way that is both entertaining and engaging.”
— The New York Times

“In The Fourth Age, Byron Reese offers the reader something much more valuable than what to think about Artificial Intelligence and robotics—he focuses on  HOW to think about these technologies, and the ways in which they will change the world forever. If you only read just one book about the AI revolution, make it this one.”
— John Mackey, co-founder and CEO, Whole Foods Market

"Reese frames the deepest questions of our time in clear language that invites readers to make their own choices. Using 100,000 years of human history as his guide, he explores the issues around artificial general intelligence, robots,  consciousness, automation, the end of work, abundance, and immortality. As he does so, Reese reveals himself to be an optimist and urges us to use technology to build a better world."
— Bob Metcalfe, UT Austin Professor of Innovation, Ethernet inventor, 3Com founder

Byron Reese is the CEO and publisher of the technology research company Gigaom, and the founder of several high-tech companies. He has spent the better part of his life exploring the interplay of technology with human history. Reese has obtained or has pending patents in disciplines as varied as crowdsourcing, content creation, and psychographics. The websites he has launched, which cover the intersection of technology, business, science, and history, have together received over a billion visitors. He is the author of the acclaimed book, Infinite Progress. He lives in Austin, Texas.
Loading...
or
Not Currently Available for Direct Purchase