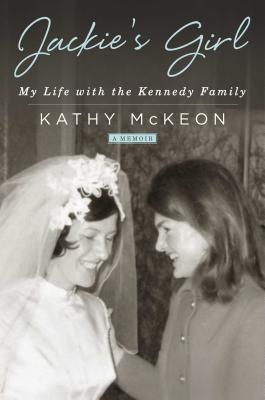 My Life with the Kennedy Family

New York Times Bestseller
An endearing coming-of-age memoir by a young woman who spent thirteen years as Jackie Kennedy’s personal assistant and occasional nanny—and the lessons about life and love she learned from the glamorous first lady.

In 1964, Kathy McKeon was just nineteen years old and newly arrived from Ireland when she was hired as the personal assistant to former first lady Jackie Kennedy. The next thirteen years of her life were spent in Jackie's service, during which Kathy not only played a crucial role in raising young Caroline and John Jr., but also had a front-row seat to some of the twentieth century’s most significant events.

Because Kathy was always at Jackie’s side, Rose Kennedy deemed her “Jackie’s girl.” And although Kathy called Jackie “Madam,” she considered her employer more like a big sister who, in many ways, mentored her on how to be a lady. Kathy was there during Jackie and Aristotle Onassis’s courtship and marriage and Robert Kennedy’s assassination, dutifully supporting Jackie and the children during these tumultuous times in history.

A rare and engrossing look at the private life of one of the most famous women of the twentieth century, Jackie’s Girl is also a moving personal story of a young woman finding her identity and footing in a new country, along with the help of the most elegant woman in America.

Praise For Jackie's Girl: My Life with the Kennedy Family…

"In a wonderfully readable narrative, she shares good and bad times with the family and their children, always faithfully protecting their privacy. McKeon's delightful memories have been tucked away for 50 years, and thankfully, she has brought them out to share the enchanting magic of Camelot with us all."
— --Kirkus

“Celebrity watchers who covet an insider’s role will find McKeon’s frank yet benevolent memoir to be both a sobering reality check and an engaging foray into the ever-fascinating world of the Kennedy dynasty.”

The fourth of eight children, Kathy McKeon grew up in Ireland and came to America in 1964 when she was nineteen. She was then hired as Jackie Kennedy’s assistant and occasional nanny to her children from 1964 to 1976. She is now a mother of three and a grandmother and lives in Florida.
Loading...
or
Not Currently Available for Direct Purchase