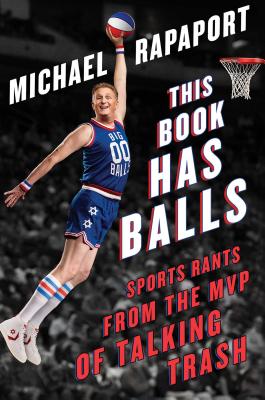 Praise For This Book Has Balls: Sports Rants from the MVP of Talking Trash…

“We are dealing with an individual who tried to convince Willis Reed that Bill Russell was overrated. He is a sick man and I often wonder what his life could have been like had the Knicks ever been a competent organization, but he has somehow managed to write a good book.” –Bill Burr

“Michael is many things.  He is a producer and actor and comedian for starters.   He is also crazy, passionate, funny and intense.   All of those qualities come through in his book.  Along with a troubling fascination with hair pieces.  All of it of course can be explained by his love for the Knicks, which even in good times isn't a remarkable experience. Buy his book and enjoy the ride.” –Colin Cowherd

“Hilarious. Reminds me of a sports version of Joan Rivers’s book I Hate Everyone…Starting with Me. Something is wrong with Michael Rapaport but that’s what makes him right. Funny fucking book!!!” –Charlamagne tha God

“The book is crude and candid, unsurprisingly one-sided, surprisingly insightful, and highly opinionated with a ton of lowbrow humor. I found myself laughing out loud several times.” –Chicago Tribune

“A ranting celebration of sports from the self-proclaimed "MVP of talking trash." –NPR

“Perfectly captures the thrill of victory and the agony of defeat.” –SI.com

Michael Rapaport is an actor, director, and comedian who’s appeared on TV shows such as Friends, Justified, The War at Home, and Prison Break, and in films such as True Romance and Mighty Aphrodite. He directed the award-winning 2011 documentary Beats, Rhymes & Life: The Travels of a Tribe Called Quest and an ESPN 30 for 30 film When The Garden Was Eden that premiered in 2014. His sports podcast, I Am Rapaport, has almost two million monthly listeners and regularly makes the iTunes top 50. He’s also a diehard Knicks fan. This Book Has Balls is his first book.
Loading...
or
Not Currently Available for Direct Purchase