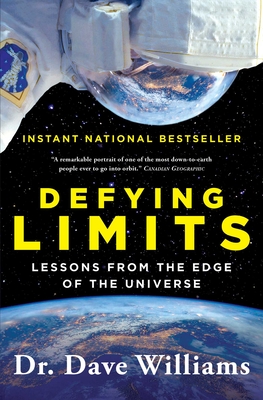 Lessons from the Edge of the Universe

An inspirational, uplifting, and life-affirming memoir about passion, resilience, and living life to the fullest, from Dr. Dave Williams, one of Canada’s most accomplished astronauts.

I had dreamt about becoming an astronaut from the time I watched Alan Shepard launch on the first American sub-orbital flight on May 5, 1961. Eleven days before my seventh birthday, I committed to a new goal: one day, I would fly in outer space.

Dr. Dave has led the sort of life that most people only dream of. He has set records for spacewalking. He has lived undersea for weeks at a time. He has saved lives as an emergency doctor, launched into the stratosphere twice, and performed surgery in zero gravity.

But if you ask him how he became so accomplished, he’ll say: “I’m just a curious kid from Saskatchewan.” Curious indeed.

Dr. Dave never lost his desire to explore nor his fascination with the world. Whether he was exploring the woods behind his childhood home or floating in space at the end of the Canadarm, Dave tried to see every moment of his life as filled with beauty and meaning. He learned to scuba dive at only twelve years old, became a doctor despite academic struggles as an undergraduate, and overcame stiff odds and fierce competition to join the ranks of the astronauts he had idolized as a child.

There were setbacks and challenges along the way—the loss of friends in the Columbia disaster, a cancer diagnosis that nearly prevented him from returning to space—but through it all, Dave never lost sight of his goal. And when he finally had the chance to fly among the stars, he came to realize that although the destination can be spectacular, it’s the journey that truly matters.

In Defying Limits, Dave shares the events that have defined his life, showing us that whether we’re gravity-defying astronauts or earth-bound terrestrials, we can all live an infinite, fulfilled life by relishing the value and importance of each moment. The greatest fear that we all face is not the fear of dying, but the fear of never having lived. Each of us is greater than we believe. And, together, we can exceed our limits to soar farther and higher than we ever imagined.

Dr. Dave Williams is an astronaut, aquanaut, jet pilot, ER doctor, scientist, and CEO. The former Director of Space & Life Sciences at NASA, he has flown to space twice, once on the space shuttle Columbia and once on Endeavor, logging over thirteen million kilometres in space and over seventeen hours of spacewalks. He has lived and worked on the world’s only undersea research habitat and is the recipient of five honourary degrees, the Order of Canada, and the Order of Ontario. Williams lives in Oakville with his wife, Cathy, two kids, Evan and Olivia, and nephew, Theo. Connect with him on Twitter @AstroDaveMD.
or support indie stores by buying on
Copyright © 2020 American Booksellers Association