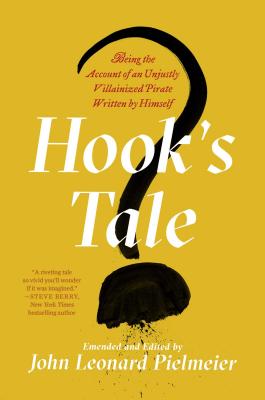 A rollicking debut novel from award-winning playwright and screenwriter John Pielmeier reimagines the childhood of the much maligned Captain Hook: his quest for buried treasure, his friendship with Peter Pan, and the story behind the swashbuckling world of Neverland.

Long defamed as a vicious pirate, Captain James Cook (a.k.a Hook) was in fact a dazzling wordsmith who left behind a vibrant, wildly entertaining, and entirely truthful memoir. His chronicle offers a counter narrative to the works of J.M. Barrie, a “dour Scotsman” whose spurious accounts got it all wrong. Now, award-winning playwright John Pielmeier is proud to present this crucial historic artifact in its entirety for the first time.

Praise For Hook's Tale: Being the Account of an Unjustly Villainized Pirate Written by Himself…

“A dazzling coming of age story about a boy who too swiftly learns much about life, love and betrayal. Little James Hook is a loner, continuously let down by relatives and friends alike, but he finds easier friendships with fairies, mermaids and a loyal crocodile. Hook's Tale is the moving story of one boy's crazy hurtle into manhood and the difficult circumstances that shape him on that journey. A glorious, alternate look at the forming of the notorious Captain Hook.”—Nuala O'Connor, author of Miss Emily

"A riveting tale so vivid you’ll wonder if it was imagined.  The world-building is complex and intriguing, appealing to the treasure hunter in us all.  Without question, John Pielmeier has his A-game on."—Steve Berry, New York Times bestselling author of The Templar Legacy and The 14th Colony

“John Pielmeier’s Hook’s Tale is an instant classic, written in an elegant Victorian/Edwardian style deliciously in the spirit of J.M. Barrie.  The purported memoir of Captain Hook (aka James Cook) is exquisite and exuberant; the tale is swashbuckling yet poignant. What a gift to readers, who yearn for more adventures in Neverland and inspired new plot twists—even a newborn crocodile. At every turn, Pielmeier offers a spine-tingling surprise; an homage to J.M. Barrie which displays his knowledgeable sensitivity to the literary provenance. This lost boy’s version of a timeless villain entertains as it enlightens.”—Laura Shaine Cunningham, author of Beautiful Bodies and Sleeping Arrangements


"In discovering and bringing to light this record of Peter Pan's nefarious doings in Neverland, John Pielmeier has done the world a great service and righted a great literary wrong.  James Cook's account sets the record straight on a number of important points, not only exonerating the mis-portrayed (and mis-named) one-handed sea captain, but also revealing the Boy Who Wouldn't Grow Up as the kidnapping psychopath he truly was.  Cook (aided perhaps by his intrepid editor, Pielmeier) is a masterful storyteller and a playful wordsmith, and his (completely true) memoir is a ripping yarn."--Forrest Leo, author of The Gentleman

John Pielmeier is a three-time Emmy- and Golden Globe-nominated playwright and screenwriter. His successful plays, television movies, and miniseries include Agnes of God, Gifted Hands, Choices of the Heart, The Memory Keeper’s Daughter, and successful screen adaption of Ken Follett’s The Pillars of the Earth. He has received the Humanitas Award (plus two nominations), five Writers’ Guild Award nominations, a Gemini nomination, an Edgar Award, the Camie Award, and a Christopher Award. He is married to writer Irene O’Garden and lives in upstate New York. Hook’s Tale is his first novel.
Loading...
or
Not Currently Available for Direct Purchase