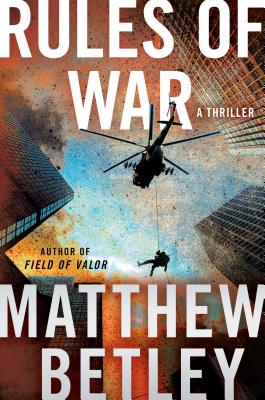 A Thriller (The Logan West Thrillers #4)

Following the events of the “fast, hard-hitting, and impossible to put down” (The Real Book Spy) Field of Valor, Logan West continues his mission to bring America’s traitorous vice president to justice, even as the clandestine group pulling all the strings makes one last deadly bid to regain their power.

The vice president of the United States is missing, the director of the National Security Agency has been assassinated, and the mysterious organization orchestrating global instability is in tatters. While John Quick recovers from a gunshot wound that nearly killed him, Logan West is on the hunt to bring the vice president back to the US to face justice for his treason. The final stakes have never been higher and Logan and his task force are left with little to no options. Will it be this warrior’s end?

Praise For Rules of War: A Thriller (The Logan West Thrillers #4)…

"Rules of War is packed with action, intrigue, and a rising sense of hair-raising, high-stakes chaos. Matthew Betley has done it again. Logan West is a hard ass with a deep sense of patriotism, and if you’re a traitor to America you better run like hell."
— Ben Coes, New York Times bestselling author of THE RUSSIAN

“Told with blazing speed, RULES OF WAR is another fun, timely, action-filled thriller from Matthew Betley—who packs more gunfights and daring sequences into his books than anyone else in the business.”
— The Real Book Spy

“Suspenseful, inventive, and relentless, FIELD OF VALOR unfolds at lightning pace. The action rings with authenticity. The story brims with twists, intrigue, and secrets that will keep readers turning pages.”
— Meg Gardiner, New York Times bestselling author of INTO THE BLACK NOWHERE

“In Field of Valor, make sure you strap in tight! Like the best rides in a theme park, this one starts FAST, and while your heart rate may occasionally approach 'normal,' it never truly does...and you'll love it! Betley's pacing, language, and presentation of situations sing the true, real notes of one who has been there. Logan West uses his considerable intelligence and fortitude to conquer the challenges presented. If you haven't discovered Matthew Betley before, congratulate yourself for doing so now!”
— Charles Davis, Fox Sports NFL Sunday Announcer & Analyst, John Madden Video Game Announcer

"Fast, hard-hitting, and impossible to put down, FIELD OF VALOR is hands-down one of the best action thrillers hitting bookstores in 2018."
— The Real Book Spy

"Thrilling and captivating, Field of Valor is a must-read. Betley’s extensive experience and knowledge as a former Marine is front and center throughout, and he makes you feel like you are right in the middle of the action. But it is his ability to develop characters like Logan West and fellow warriors whom you come to love that keeps you holding your breath as this thriller takes unexpected twists and turns right up to the last page."
— Joan Lunden, New York Times bestselling author and award-winning journalist

"What we have here is non-stop action. The series has been optioned for video and is a natural for cross-marketing between the books and the digital. If you have seen "Strike Back," the addictive Cinemax series, or the beautifully realized John Woo movie franchise, you'll get a hint of what FIELD OF VALOR is like."
— Bookreporter.com

"Thriller authors of this caliber are rare."
— San Francisco Review of Books

Matthew Betley is a former Marine officer of ten years. His experience includes deployments to Djibouti after September 11, and Iraq, prior to the surge. A New Jersey native who considers Cincinnati home, he graduated from Miami University in Oxford, Ohio, with a BA in psychology and minors in political science and sociology.
Loading...
or
Not Currently Available for Direct Purchase