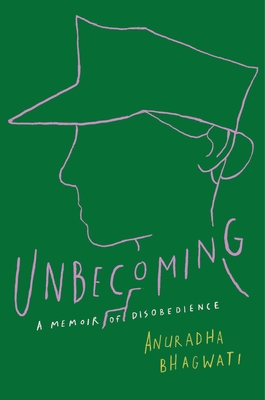 A raw, unflinching memoir by a former US Marine Captain chronicling her journey from dutiful daughter of immigrants to radical activist effecting historic policy reform.

Yet once training begins, Anuradha’s G.I. Jane fantasy is punctured. As a bisexual woman of color in the military, she faces underestimation at every stage, confronting misogyny, racism, sexual violence, and astonishing injustice perpetrated by those in power. Pushing herself beyond her limits, she also wrestles with what drove her to pursue such punishment in the first place.

A tale of heroic resilience grappling with the timely question of what, exactly, America stands for, Unbecoming is about one woman who learned to believe in herself in spite of everything. It is the kind of story that will light a fire beneath you, and inspire the next generation of indomitable female heroes.

"Anuradha Bhagwati has written a captivating and vital book, one that seamlessly marries compelling, insightful personal narrative with her astute critique of how the systems that shape our lives are failing us. It’s a must-read."— Soraya Chemaly, activist and author of Rage Becomes Her