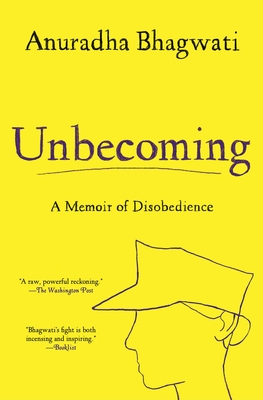 Brimming “with the ebullient Bhagwati’s fierce humanism, seething humor, and change-maker righteousness,” (Shelf Awareness) a raw, unflinching memoir by a former US Marine Captain chronicling her journey from dutiful daughter of immigrants to radical activist fighting for historic policy reform.

Yet once training begins, Anuradha’s GI Jane fantasy is punctured. As a bisexual woman of color in the military, she faces underestimation at every stage, confronting misogyny, racism, sexual violence, and astonishing injustice perpetrated by those in power. Pushing herself beyond her limits, she also wrestles with what drove her to pursue such punishment in the first place.

“Bhagwati’s fight is both incensing and inspiring” (Booklist) in this tale of heroic resilience and grapples with the timely question of what, exactly, America stands for, showing how one woman learned to believe in herself in spite of everything.

"Anurada Bhagwati has written a captivating and vital book, one that seamlessly marries compelling, insightful personal narrative with her astute critique of how the systems that shape our lives are failing us. It’s a must-read."— Soraya Chemaly, activist and author of Rage Becomes Her

"Unbecoming is stunning meditation on what the process of becoming a gentle but commanding feminist badass actually looks like. I was, by turns, floored, amazed, inspired, educated, and uplifted as I joined Anuradha on a journey of what it means to be a queer Brown person navigating new and fraught paths to the American Dream." —Brittney Cooper, Eloquent Rage: A Black Feminist Discovers Her Superpower