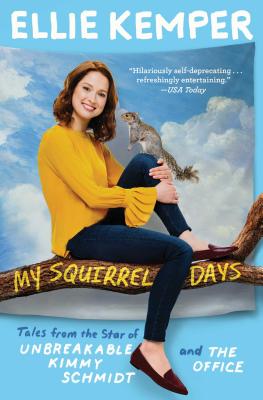 Tales from the Star of Unbreakable Kimmy Schmidt and The Office

Praise For My Squirrel Days: Tales from the Star of Unbreakable Kimmy Schmidt and The Office…

Ellie Kemper is the Emmy-nominated star of the Netflix original series, Unbreakable Kimmy Schmidt. She portrayed Erin Hannon on NBC’s The Office; costarred in Bridesmaids; and has also appeared in 21 Jump Street, Identity Thief, and Somewhere. Ellie voiced Katie in The Secret Life of Pets and is the voice of Crackle on Disney’s Sofia the First. Her writing has appeared in GQ, Esquire, The New York Times, McSweeney’s, and The Onion. Ellie currently lives in Manhattan with her husband and son, but is constantly trying to find a way to get back to St. Louis. My Squirrel Days is her first book.
Loading...
or support indie stores by buying on