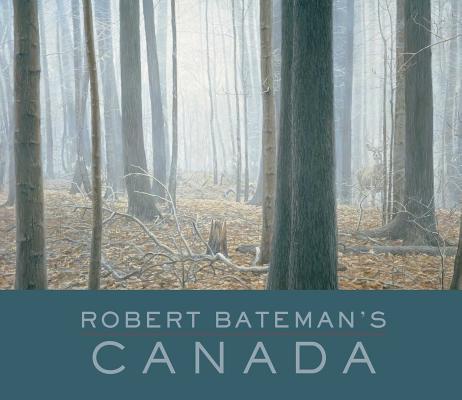 From Canada’s most beloved painter comes a deluxe, over-sized art book showcasing Robert Bateman’s vision of the Canadian landscape, coast to coast, for the 150th anniversary of Confederation.

Join internationally acclaimed artist Robert Bateman on a journey across the seven regions of Canada and see through his eyes the beauty of our country.

With a desire to truly know the place he calls home, Bateman has spent his life painting the Canadian landscape. From the historic eastern shores to the cold endless north and the luscious west coast, he shows us the land that has captivated artists and nature lovers for decades.

Full of paintings from every region in Canada, Robert Bateman’s Canada celebrates the history, diversity, and natural wonder of our country. This is Robert Bateman’s vision of Canada as you’ve never seen it before.

Canadian painter Robert Bateman has been featured in exhibits across the globe, opening a permanent exhibition at The Robert Bateman Centre, in Victoria, B.C., in 2013. He was appointed an Officer of the Order of Canada in 1984 and a Member of the Order of British Columbia in 2001. In 2013, he was awarded the Royal Canadian Geographical Society Gold Medal in recognition for his commitment to preserving the Canadian landscape. Bateman’s notable achievements include being named one of the twentieth century’s 100 Champions of Conservation by the U.S. National Audubon Society in 1998 and bestowed the Amnesty International Human Rights Defender Award in 2007. A beloved teacher, avid geographer, and renowned naturalist celebrated for his accessible realist style, Bateman is a Life Member of the Royal Canadian Academy of the Arts. He is the bestselling author of fourteen books, including his memoir Life Sketches. He continues to paint and lives with his artist wife, Birgit, in Salt Spring Island, British Columbia. Visit BatemanCentre.org for more information on Bateman and his art.
or
Not Currently Available for Direct Purchase