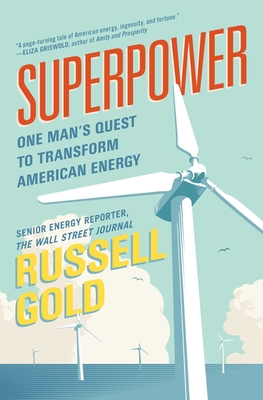 Meet Michael Skelly, the man boldly harnessing wind energy that could power America’s future and break its fossil fuel dependence in this “essential, compelling look into the future of the nation’s power grid” (Bryan Burrough, author of The Big Rich).

The United States is in the midst of an energy transition. We have fallen out of love with dirty fossil fuels and want to embrace renewable energy sources like wind and solar. A transition from a North American power grid that is powered mostly by fossil fuels to one that is predominantly clean is feasible, but it would require a massive building spree—wind turbines, solar panels, wires, and billions of dollars would be needed.

Enter Michael Skelly, an infrastructure builder who began working on wind energy in 2000 when many considered the industry a joke. Eight years later, Skelly helped build the second largest wind power company in the United States—and sold it for $2 billion. Wind energy was no longer funny—it was well on its way to powering more than 6% of electricity in the United States.

Award-winning journalist, Russel Gold tells Skelly’s story, which in many ways is the story of our nation’s evolving relationship with renewable energy. Gold illustrates how Skelly’s company, Clean Line Energy, conceived the idea for a new power grid that would allow sunlight where abundant to light up homes in the cloudy states thousands of miles away, and take wind from the Great Plains to keep air conditioners running in Atlanta. Thrilling, provocative, and important, Superpower is a fascinating look at America’s future.

Praise For Superpower: One Man's Quest to Transform American Energy…

“With propulsive storytelling, Russell Gold presents one of America’s most ambitious and groundbreaking projects for renewable energy.  Following larger-than-life men and women seeking to reshape the current energy landscape, Superpower is an essential, compelling look into the future of the nation’s power grid.”  —Bryan Burrough, author of Public Enemies and The Big Rich

"Russell Gold is among the most thoughtful writers on energy, and while this compelling book is about one man’s battle to remake America’s power grid, it's also a fascinating contemplation of renewable energy in America." —Bethany McLean, author of The Smartest Guys in the Room: The Amazing Rise and Scandalous Fall of Enron

Russell Gold is an award-winning investigative journalist at The Wall Street Journal. Gold’s reporting has taken him to five continents and above the Arctic Circle two times. In 2010, he was part of the award-winning Wall Street Journal team that covered the Deepwater Horizon explosion and oil spill. His first book, The Boom, was longlisted for the FT Goldman Sachs Business Book of the year prize in 2014. He lives in Austin, Texas with his wife and two children.