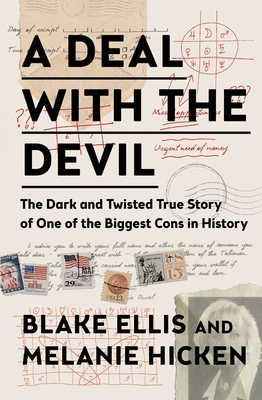 A Deal with the Devil

“A personal how-to guide for investigative journalists, a twisted tale of a scam of huge proportions, and a really good read” (Bethany McLean, author of The Smartest Guys in the Room), this spellbinding true story follows a pair of award-winning CNN investigative journalists as they track down the mysterious psychic at the center of an international scam that stole tens of millions of dollars from the elderly and emotionally vulnerable.

Victims received personalized letters from a woman who, claiming amazing psychic powers, convinced them to send money in return for riches, good health, and good fortune. The predatory scam had been going on unabated for decades, raking in more than $200 million in the United States and Canada alone—with investigators from all over the world unable to stop it. And at the center of it all—an elusive French psychic named Maria Duval.

Based on the five-part series that originally appeared on CNN’s website in 2016 and was seen by more than three million people, A Deal with the Devil picks up where the series left off as Ellis and Hicken reveal more bizarre characters, follow new leads, close in on Maria Duval, and connect the dots in an edge-of-your-seat journey across the US to England and France.

A Deal with the Devil is a fascinating, thrilling search for the truth that will suck you “deep into the heart of a labyrinthine investigation that raises bigger questions about greed, manipulation, and the desperate hunger to believe” (Megan Abbott, author of You Will Know Me).

"An entertaining exposé of an epic episode from the chronicles of consumer fraud."
— Publishers Weekly

Melanie Hicken lives in Los Angeles and is a graduate of Syracuse University’s Newhouse School and New York University. With Blake Ellis, she is an award-winning investigative journalist with CNN. Their investigations have uncovered everything from nursing home abuse to widespread consumer fraud.
Loading...
or support indie stores by buying on